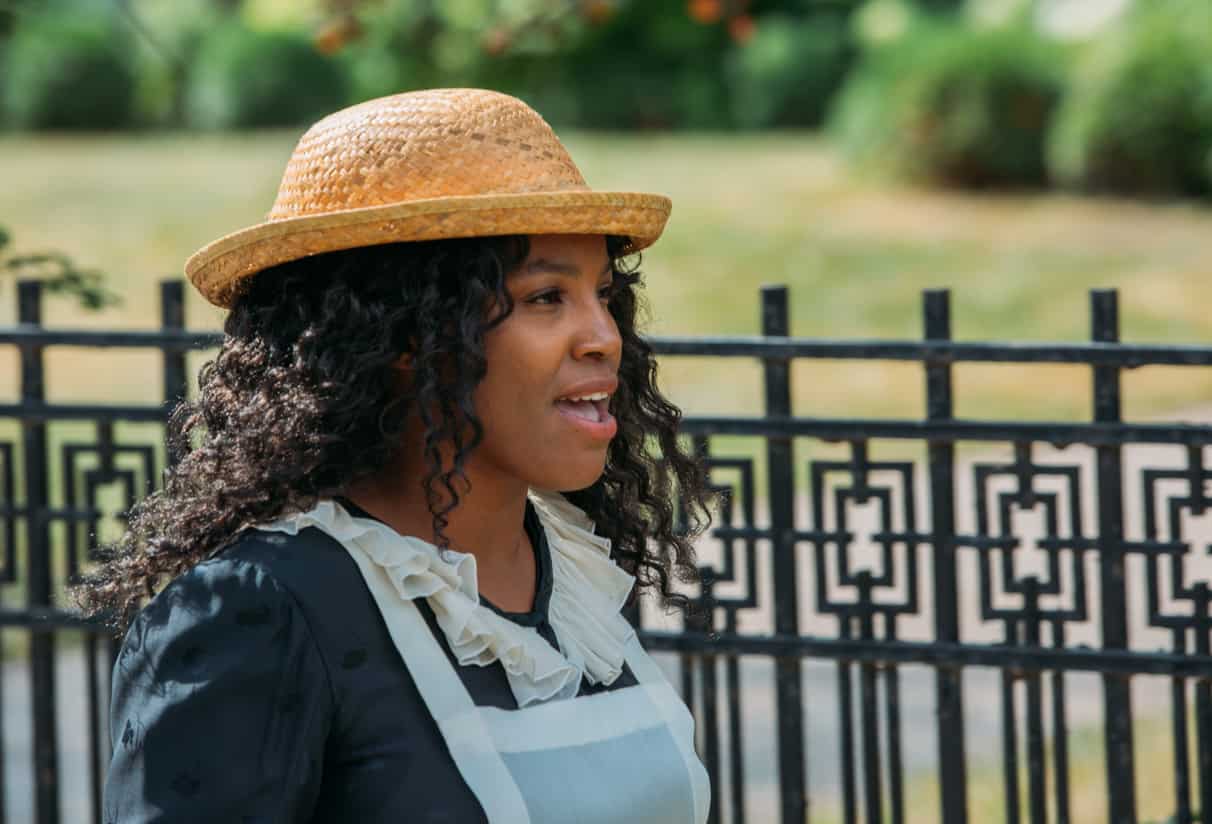 Part historical drama, part musical, part love story; STAND! is all of these things–and a compelling film about human rights. Lisa Bell makes her impressive screen debut as Emma, a young Black woman fleeing racial violence in the south. She lands in Manitoba, and finds herself embroiled in the 1919 Winnipeg General Strike, which effectively brought the province to its knees.

For years, Bell has been performing in Winnipeg, wowing packed venues with her powerful vocal range. So, it wasn’t too much of a surprise when writer Danny Schur called her up to ask if she’d sing the song for the end credits. Watching her rehearse, he was impressed with her stage presence, and asked her to audition for the role of Emma. “It’s my first movie—it’s a big deal!” says Bell with a shriek of excitement. “That in itself was unreal. But not only that–it’s a movie musical, which is a real dream, because I have a strong musical theatre background, and I am a vocalist. It married the two.  It’s an awesome project to be involved in for Winnipeg,” she says, “but also for Canada.” Audiences will no doubt agree.

STAND! follows a Romeo & Juliet-esque tale set in 1919, amidst the political and social turmoil on Winnipeg streets, specifically focusing on the Winnipeg General Strike. It resonates with themes just as timely and pertinent today: racial injustice, social inequality, women’s rights and the power of the people. While much of the film centres on the love story between Ukraine immigrant Stefan (Marshall Williams) and his Jewish suffragette neighbour, Rebecca (Laura Slade Wiggins), Lisa’s role as Emma adds another dimension to the immigrant story of that time. “My character did a great job of highlighting the story of the Oklahoma immigrants who came to Winnipeg at that time to escape racial segregation and the Jim Crow laws,” says Bell. It’s an important part of our history that’s often paved over, and STAND! does a brilliant job of bringing it to the fore.

For Bell, the fact that it was entirely shot in her hometown was added fun. Beyond the streets of Winnipeg, many of the scenes took place at the exact sites where the events happened, one hundred years ago. Members of the crew shared how their grandparents were part of the 30,000 who participated in the six-week strike that brought the city to a standstill. The strong connection to the subject matter made for a very warm environment to shoot in—there was a palpable feeling of pride on set. “Everyone wanted this work of art to turn out so well. We were all involved in this creative process and we were laser focused.”

STAND! is an inspiring tale about activism that echoes so much of what is happening in the world today; from the global #FridaysForFuture movement, protests against #Brexit, the push for democracy in Hong Kong, to the local level, with TDSB’s ongoing fight with Ontario’s conservative government. “This movie really highlights the struggles and triumphs of our ancestors, and what they went through,” says Bell. “If it wasn’t for these people who came together and initiated change, we wouldn’t have fair wages, we wouldn’t have fair working hours, and just worker’s rights in general.” It’s an invigorating story that reminds us that change is possible through collective mobilization.

Bell’s performance is stunning, and her powerful voice strikes a chord. Beyond the history, being part of STAND! taught her a lot about herself. “I discovered that I had more strength than I thought I had. It’s a big endeavour to take on, my first feature film—I didn’t know what to expect— I learned that blessings come to you when you’re ready to receive them.”

Indeed, the story of STAND! is a reminder of the strength that we can all summon within ourselves to use as a force for good in the world.
STAND! is now playing at select theatres across Canada. Watch the trailer now.