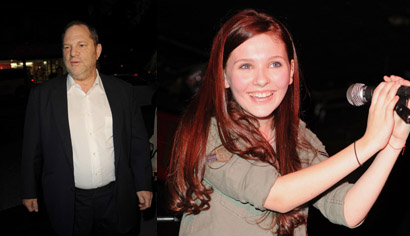 At The Horseshoe Tavern last night for the “Janie Jones” party, Harvey Weinstein yelled “Quiet!” so we could all watch Little Miss Sunshine sing her heart out. Abigail Breslin’s performance was folky, and sweet; not at all resembling the super freaky strip show that made her famous as the wee and kooky Olive. Presumably, Hollywood’s most powerful man was there considering “Janie Jones” for distribution. Curious to know more, we not-so-subtly eavesdropped but only heard him say this a dozen times, “It’s all taken care of.” Shuffling to the bar to get a beer, our bum shimmied against the rounded rump of Weinstein’s, it was like a bum high-five. In the span of an hour, we crossed paths with the movie mogul multiple times and while pinned between two bar stools, he turned to us – and with full purpose and authority said, “HI.” It was our one chance to get a really good quote, maybe an invite to the InStyle party, insider information on the next big thing, a job in NYC – WHATEVER! But like a dumbfounded robotic parrot, all that we could muster up was, “HI.”