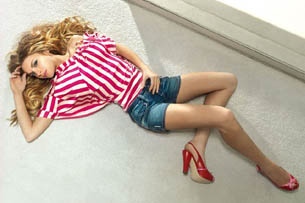 Or, How Lindsay Became A Scary Robot Doll

Shinan Govani had to watch this three times to understand what the hell was going on. We only had to watch the Lohan-in-Space clothing ad once to be convinced that you really can throw it all away, only to be re-built with robot parts, unable to stand without the help of a revolving platform. Congrats, Lo-ho! Your agent now realizes you’re only capable of memorizing a script obviously recycled from a 1992 Kodak kiddie camera ad. This disturbing Roy Lichtenstein bastardization is the most obvious visual manifestation of a downward spiral we’ve ever seen. They’ll be showing this to Junior High students for years: DON’T DRINK AND DRIVE! LOOK WHAT SHE’S BECOME! Congratulations, Lindsay, on making the rest of the world feel a little bit better about every poor career choice they’ve ever made.

We like Bridgitte Bardot and Serge Gainsbourg’s take on mono-syllabic sex kittens a lot more: http://www.youtube.com/watch?v=7dDo7-jrtZM

The moral here? Don’t robot out for anyone except Serge.

Crank It: Your Get Lo Playlist Feat. City High, Hilary Duff And MGMT

Shedoesthecity + Bangs & Blush invite you to Get Lo at Clinton’s