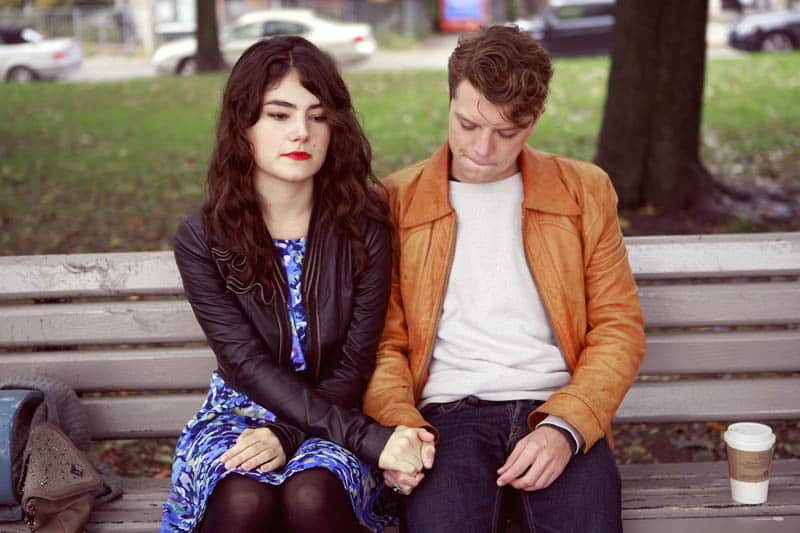 “So much that was so personal is now for the ‘world’ to see...but that's the wonderful part, too.”

You want proof that LONG STORY, SHORT is worth the hype? How about the fact that I just watched both available episodes back-to-back and am already craving the release of the next one? Boom, addicted.

Written and starring Toronto actor Katie Boland (who used to write for us, woo! Oh yeah and she also wrote a book because she is AWESOME), LONG STORY, SHORT follows Kristen Harvey, a 21-year-old who just quit art school in NYC and moved home to Toronto. She’s living in her childhood bedroom, pining for her ex-boyfriend, getting drunk with her friends, and rediscovering her city. The five-minute episodes, of which there are 11 in total, are edgy, smartly written, and a lot of fun. The series shows off Toronto in raw and genuine ways: streetcars, subway stops, dive bars, parks…it’s the real Toronto, not the fluff.

Created by Boland and her mother, LONG STORY, SHORT is based on Boland’s actual life experiences. Terrifying? Invigorating? Cathartic? Yes and yes and yes. What else? Read on.

Shedoesthecity: You’re something of an every woman when it comes to creative output; as a veteran artist in many mediums, what has been most unique about the process of Long Story, Short for you?

Katie Boland: Honestly, I’ve never had so much fun. I think the fact that almost every part of the process, especially shooting, was the best time of my life. It was hardly like work, which was the real surprise. I’ve always found my work fulfilling, though it can be emotionally draining and challenging, but Long Story, Short felt like it gave a lot back to me. It was encouraging and life affirming to know that I could take my own experiences, ones that weren’t always positive, and make something from them that other talented artists who I really respect agreed be a part of. It made me feel so grateful.

SDTC: Tell us a little about how the series came to be. What were the challenges? The really exciting moments?

KB: I wrote a collection of personal essays called LONG STORY, SHORT that came from what I call “The Summer I Lost My Mind.” And though I liked the themes of the essays, I didn’t think they worked very well as a literary collection. Still, I was fascinated by this period in my life and who I became that summer. So, when my mom told me the Independent Production Fund was looking for a web series, together we decided that this could be interesting subject matter for a show.

The challenges were that there was never enough money or enough time, but that’s always true. The really exciting moment was seeing it all come together, watching these wonderful actors say words that I’d written, and seeing my mom having such a great time directing the material and making it come to life. It was also really exciting when Shaftesbury wanted to distribute the series. They are such a big, wonderful company and the fact that they wanted to invest in my storytelling, in the hard work that my mom and I did, was overwhelming. And now that it’s being launched on Koldcast, and seeing fans tweet about the show and what it meant to them, it just feels surreal—like, what did I do to deserve this? It is so exciting.

SDTC: The series deals with some very personal stuff: Is it strange collaborating with your mum, the director and co-producer, on something so emotionally raw?

KB: Strangely, not really, because she and I are really close. She was privy to almost everything that happened that summer, and we’ve both always been very honest with each other. The one thing I do want to clarify is that she did not direct the sex scenes! That would have been too weird, especially for the poor boys! I think the strange part is putting this out into the world in general; so much that was so personal is now for the “world” to see…but that’s the wonderful part, too. I like sharing my experiences, not only for personal reflection, but also because I think other people have had similar experiences. I hope I’ve created something that people can see versions of themselves and their relationships in.

SDTC: How did the casting process work? When did you know the group (Lauren Collins, Tommie-Amber Pirie, Michael Seater, and Adam Butcher) had clicked?

KB: I just offered roles to my friends and to those who I thought would be the right fit. I went strictly on intuition. I knew that most of us were friends beforehand, but I didn’t really know that it was going to click for sure until our first table read. I got a really special feeling then, like, “I’ve stumbled upon something cool here.” I also think that the set was very relaxed, and being an actor myself, I understood what I find hard about some sets and tried to give them as much freedom as I could. If they wanted to change a line, I let them. They could wear whatever they wanted. So I also think some of the chemistry was born out of comfort and less restrictions than usual. Also, I think since we were doing it so quickly and working so hard, everyone felt really personally invested in it. And I believe that lent to their investment in their characters and their fictional relationships on the show.

SDTC: What advice would you give to other young women looking to make a creative dream of theirs a reality?

KB: Do it. That’s the only advice that I can give. Go out and do what you want to. Get involved in a creative community, seek out people who are likeminded and making things happen for themselves, and then make things together. Life is short, and the span of a creative career is shorter. You can spend a lot of time waiting to be “ready” or “good,” but I don’t think you ever feel that way about yourself. I think one of my greatest strengths is that I take action, and that is what has helped my career more than anything. I still spend a lot of time making excuses and procrastinating, but the difference I’ve seen in successful people is that they just go and create things, regardless of the outcome and the reception. You can’t worry about that stuff, you just have to take what’s in your heart and in your head and put it out there. It’s scary but I believe the alternative is worse.