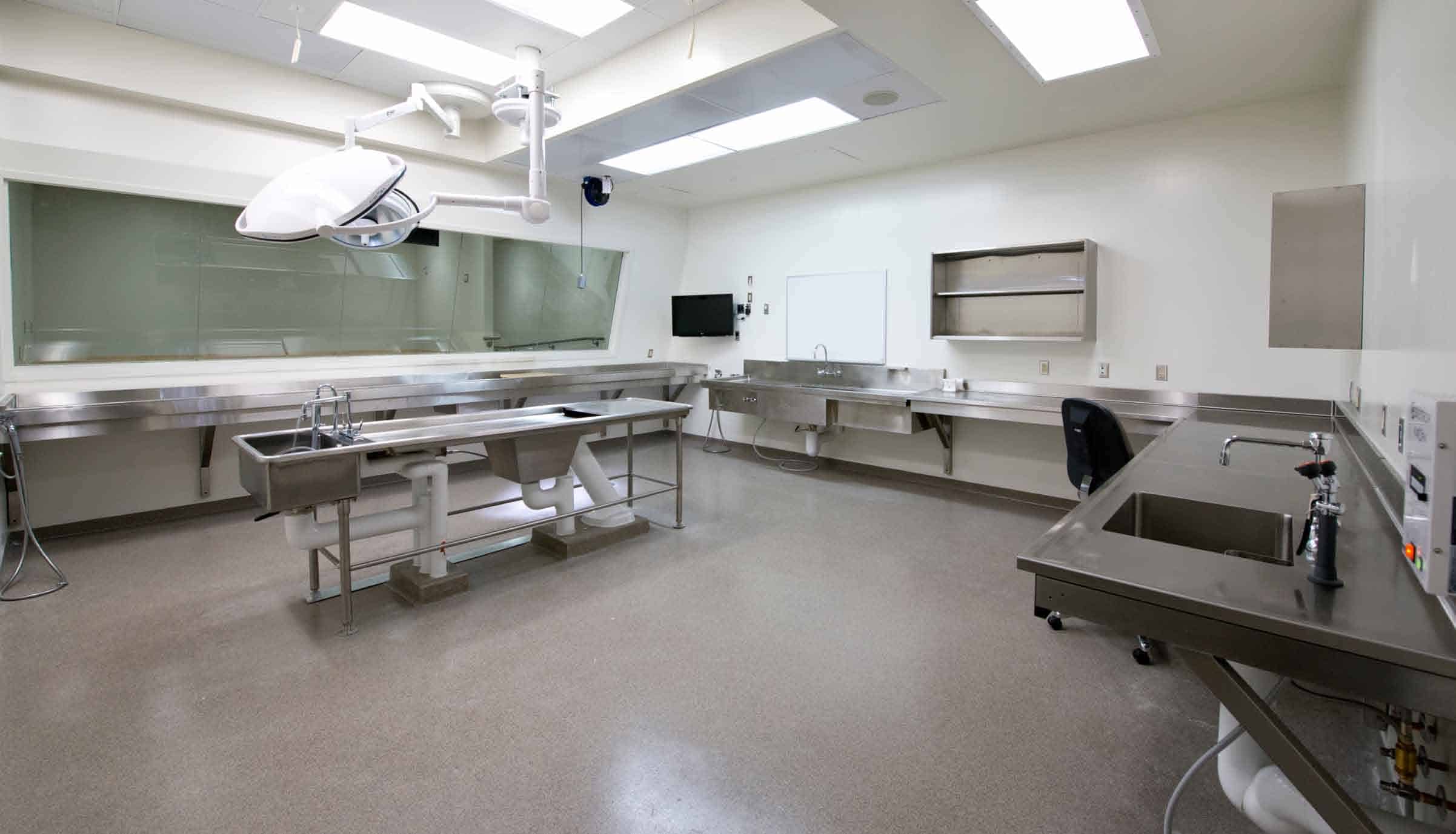 A look inside Toronto’s “CSI”

Architects typically don’t take into account gunfire, toxic gases, and outbreaks of airborne pathogens when they design office buildings. But these were all major considerations for designers of the colossal Forensic Services and Coroner’s Complex near Keele and Wilson. The 665,000-square-foot, $1-billion building is unlike any other facility on the planet. It combines forensic sciences, forensic pathology services and the Office of the Chief Coroner under one roof.

In order to handle nearly two-thirds of the 6000 autopsies performed in Ontario each year, the complex has to be prepared for any situation; including natural disasters, mass-murders and disease outbreaks (although the most common scenario is natural death). A refrigerated walk-in body storage area (kept at a constant 4 degrees) can accommodate multiple corpses on metal slabs awaiting autopsy. Forensic pathologists spend their days in the autopsy suite or examining microscopic tissue samples (in addition to reviewing x-rays, CT scans, toxicology tests and consultation reports) to help determine cause of death. 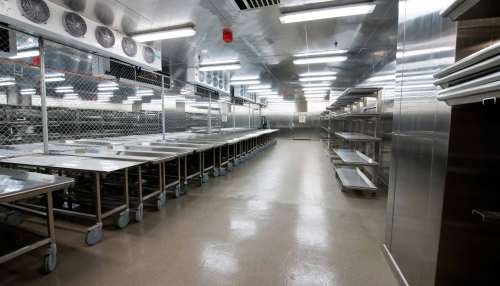 To prevent a cataclysmic outbreak of airbone pathogens (Like SARS, for example), the air-handling system is completely separated from the rest of the building and passes the air through high efficiency particulate air (HEPA) filters. Unsurprisingly, there are a lot of doors. “Whatever they’re working on comes in through a Sally port area that has a sophisticated airlock,” explained WZMH’s Nicola Casciato (one of FSCC’s planning design and compliance architects).

“So, a truck or ambulance would pull up, take the body out, it would go through an airlock, then after that you’re in what’s called the ‘dirty’ area. That’s when a body comes in.” Pathologists must pass through a change-room & shower, sit on a bench & swing their feet over to the other side, then put on different footwear to proceed to the ‘dirty’ area. 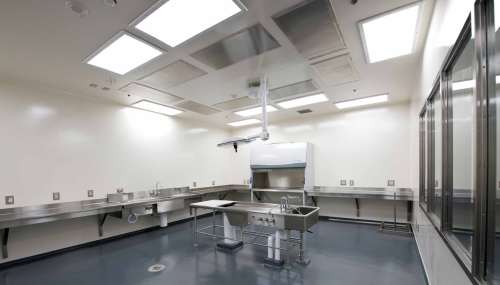 When dealing with forensics involving firearms, sometimes you have to actually pull the trigger in order to match a bullet to a particular gun or even determine what type of gun a bullet came from. “We put [the firing range] in the lower level of the building because it required a lot of length,” says Casciato. “Plus the acoustic requirements for these firing spaces are significant. You’d never get any work done when someone is shooting off a gun.” The air-system is designed so the air flows away from the person who is firing the gun (to stop bullets from returning to sender). The range is coated in special material that helps to prevent bullets from ricocheting, and the space is designed to be able to accommodate a car for crime scene reconstructions. 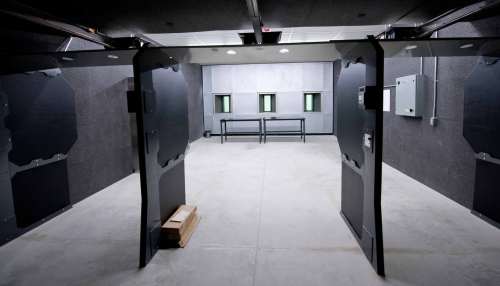 Automobiles factor heavily in many forensic investigations, so the FSCC contains a range of extrication and examination bays. These function as pristine, hi-tech mechanic stations for body extractions or to determine if a vehicle has been involved with a crime. They include cranes and heavy equipment for removing human remains, plumbing traps built into the floor to prevent any evidence from being lost, a specialized extraction bay for the charred remnants of burnt cars – even an examination bay that can accommodate a city bus. 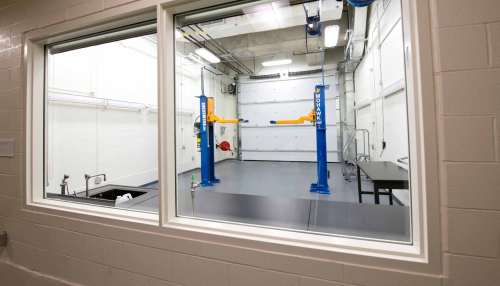 The toxicology extraction labs are used to analyze evidence in cases involving impaired driving, sexual assault, homicide and crime involving drugs. “Snorkels” had to be included – tentacle vacuum hoses that are used to suck toxic fumes (the by-product of mass spectrometer gas chromatographs) away from the face. “It’s bizarre when you see them in a room, all those snorkels coming down to the desk top,” laughed Casciato. 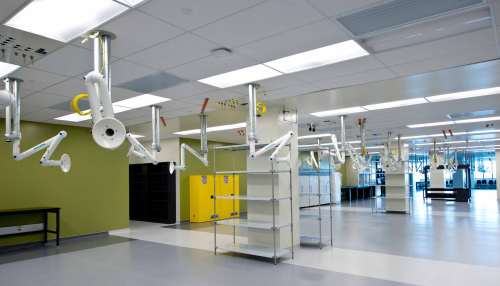 Achieving a modicum of work/life balance can be a challenge when you’re constantly confronted with evidence of gruesome crimes. The “Forensics Common” atrium was designed to promote collaboration and security, and offer respite with its glass elevators and warm, inviting seating areas. For employees facing gruesomeness daily, the atrium functions as a tranquil refuge. 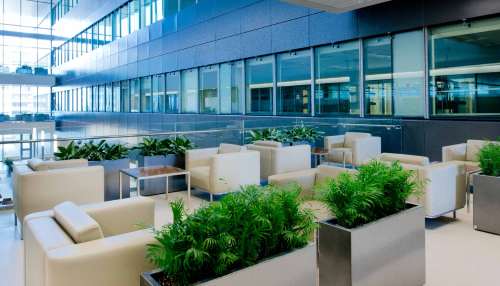 Elsewhere in the building, a viewing gallery allows grieving families to visually identify bodies in privacy—a step up from previous facilities in downtown Toronto, which only provided a video link. And the autopsy suites were designed to be flooded with natural light, a far-cry from the chiaroscuro lighting of CSI shows.

For forensic pathologists, the most common misconception about their job is that cause of death “can be determined in 30 mins or less,” explained Cheryl Mahyr from the Office of the Chief Coroner. “We refer to this as the CSI effect for television is very misleading. While a preliminary cause of death can be determined quickly in some cases (i.e. gunshot wound to the head), it is more complicated in the majority of cases. Television also leads the public to believe that there are tests for all sorts of things and that is simply not the reality.”