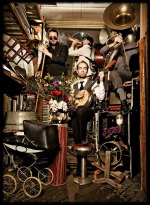 L’Orchestre d’Hommes-Orchestres peforming Tom Waits is mesmerizing and moody like a scene out of HBO’s Carnivale. It feels drunk, haunted and a little bit freaky: be prepared to witness a performance like no other.

Tom Waits music is generally dark. We listen to it when we want to search deep within ourselves and unravel the dirty, lonely or confused parts, and L’Orchestre d’Hommes-Orchestres builds a new layer with their experimental interpretation. Slamming suitcases, whiskey screwing, and clanging tea cups make for a dynamic onstage performance while also adding rhythm and sound that will loosen you into a swaggering and uninhibited Raggedy Anne.

As described in the press release which also points out that nearly 100 objects are incorporated as invented instruments: “Mixing styles and readapting the arrangements, the multi-instrumentalists of Quebec City’s beloved band perform in front of each other, over each other, trading instruments and vocals, putting their fingers between the strings, spokes in the wheels, ropes round their necks.”

For music and theatre lovers, this vibrant ensemble will not disappoint. I’m fairly certain this is the only Canadian band that has a dude who plays the baby cradle. Other mysterious notes to look forward to? The handkerchief, boots, scissors and wood saw. Check out this video and get lost in their wacky world.

More info at The Theatre Centre.