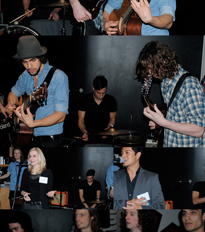 Seated formally around the board room table at Lucky Student HQ, the DInosaur Boneheads make attempts at straight answers to the usual onslaught of questions.  The evening was put together by the latest in student life and lifestyle, Lucky Student, more or less an online conversation between advertisers and students.  Watch ads.  Rate ads.  Have your say.  Get a prize.  Capiche?  Pretty straightforward, and a pretty neat evening all in all.  The King west office was teeming with the friendliest staff, stories of hand-laid floors, snacks by the sombrero-full and a live set plus questions for the band, wherein Ben Fox let the cat out of the bag as to the band name.  Turns out, it was all just a crush on Ross Geller.

“Anyone who writes a song or paints a picture wants someone to see it.  It’s like a baby.  And we want as many people to see our strange little baby as possible”. -Ben

Describe your sound in five words
Underlying, disquieting – then everyone draws a picture of a house on the whiteboard.  You know that house with the X through it that you can draw with one single line if you are beyond normal human intelligence?  RESULTS NOT POSTED.

Describe for me the best show you’ve ever played
Our two year anniversary show.

What’s the absolute best reaction you could get to your music?
Movement.  Goosebumps.

If you could score a film, which film would you choose?  (Or… make one up).
Eternal Sunshine of the Spotless Mind

Which five cities would you include in a fantasy tour?
NYC, London, Berlin, Buenos Aires, Barcelona.

Dave – Weezer, post-Pinkerton, pre-Green Album.
Lucas – Wilco at Alderney Landing, Nova Scotia
Branko – Moneen in the basement of Guelph University. Incubus at Copps Colliseum.
Josh – Portugal.  The Man and Fall of Troy at Magic Stick.  Also Do Make Say Think and Holy Fuck at Magic Stick.  They have some good shows.
Dave – I saw Janet Jackson at Canada’s Wonderland when I was five years old.

Where is your favourite place to sing?
Dave – the sidewalk.
Branko – home alone.
Josh – I can’t go in the shower without singing.
Ben – home.
Lucas – cooking or biking.  Once I get the squirrel out of my kitchen, that is.