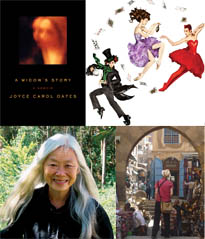 Pick a favourite person and treat them to a night of inspiring culture or interesting conversation. Whatever tickles your fancy, Luminato has a hot ticket for you: dance, music, literature, visual art, and film are all celebrated at events over the festival. Here are our favourite must-sees. Luminato runs June 10-19th at various venues across the city. For more…

Alice’s Adventures in Wonderland
The much-anticipated performance from the National Ballet of Canada has been stirring our imagination all summer. Tickets start at $21.50. Buy tickets.

Ann Patchett
June 11 -Al Green Theatre (Miles Nadal JCC), 750 Spadina Avenue (at Bloor),
New York Times bestselling author Ann Patchett (who captured our hearts with her beautiful novel Bel Canto), is hosting the Canadian launch of her new book at Luminato. Patchett returns to South America for State of Wonder, the novel is an adventure story set in the Amazon jungle. $20. Get tickets.

Joyce Carol Oates
June 15 -Glenn Gould Studio (Main Floor of the CBC Building) 250 Front Street West
Award-winning author Joyce Carol Oates will be in Toronto to unveil a work unlike anything she has written before: a memoir about the unexpected death of her husband. Oates will discuss A Widow’s Tale with Jane Urquhart. $20. Get tickets.

One Thousand and One Nights
An ambitious staging of the acclaimed Lebanese novel, this work will be performed in two parts, in English, Arabic and French (with surtitles).  Tickets start at $30.

RBC Presents: The New Yorker at Luminato
A series of events celebrating insight and ideas. Info.

Spontaneity: A New York State of Mind
June 13 – Art Gallery of Ontario (in Baillie Court) 317 Dundas Street West
Any exhibit that sells itself with an Allen Ginsberg quote is an exhibit for us. This exhibit at the AGO showcases the surge of creative energy that swept through New York in the 1950s. From 6-8 pm, ticketholders will have access to long-awaited exhibition Abstract Expressionist New York, Masterpieces from the Museum of Modern Art. From 8-10 pm, guests will enjoy jazz performances, readings of beat poetry, and Cunningham-inspired dance performances. Co-founder of Trampoline Hall Misha Glouberman will host the evening.

Tout Comme Elle
June 14-18 | Preview: June 13. Bluma Appel Theatre, St. Lawrence Centre for the Arts
Fifty women come together for the English language premiere of this exploration of the relationship between mothers and daughters, a combination of movement, text and song. For tickets: Get tickets.