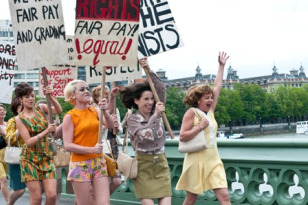 In 1968, women who worked at the Ford plant in Dagenham England, boldly went on strike to demand equal pay. What started as an exciting small town flurry grew into an emotionally charged political upheaval that received international attention, directly impacting women’s rights on a global level. Directed by Nigel Cole (Calendar Girls, Saving Grace), and based on a true story, this film is a riveting journey with exceptional acting; a must-see for young women to appreciate and pay homage to the heroic battles fought before their time. If you are like us, you will find yourself cheering on their pursuit and wanting to stand alongside with a painted sign reading “EQUAL PAY” bolded in red. Sally Hawkins plays Rita O’Grady, the true life heroine that spearheaded the strike. She went head-to-head with the union, Ford management – not to mention the men in her town who disapproved of the walk-out. In a tremendously convincing performance her character begins as tender and naive but grows steadfast and mighty, unwavering from core beliefs. Rosamund Pike plays the role of Lisa, the demure and intelligent wife to a Ford executive. She finds herself in the complicated position of being earnest to the women’s cause while also domestically entangled within it. It is a film that truly captures the magic of the human spirit, and shows how a small group of working class women, took it upon themselves to make big change. From the colourful scenes within the car factory to storming London’s parliament, Made in Dagenham, shares an invaluable story that accurately captures the true conviction and enthusiasm of this moment in time and evokes well-deserved empathy from beginning until end.