Sarah Michelle Brown has a passion for telling stories that reach out and give audiences a powerful experience.

Her most recent project is a beautiful short film she created after the Women’s March on Washington: Toronto. We want to share it with you.

Why Sarah Michelle Brown made this film:

Last week, I was feeling very anxious, alongside many people around the world. I knew the march was coming, but I resisted committing to going.

The first sign of a deeper calling was when I grabbed my camera battery Friday night and plugged it into the wall to charge. I went to bed saying, “I’ll decide if I’m going in the morning.”

The morning came, and I still felt anxious. You see, I haven’t been to many protests. I was worried about possible violence, arrests… I even imagined what I would do if I got caught in a police kettling incident like the crowd at the G20 protests. Was my safety at risk? Would I start filming if the police or protesters got violent? Would I get caught up in the fray?

Then on Saturday morning, even though I felt nervous, even though I was heading to the march with only my camera in-hand, I put on my ripped jeans, grabbed my warm-enough coat, tossed on my boots and stepped out the door.

What I found was that the march was truly about the small, human moments happening around me. And moments just like those were also happening around the world. There was a strong feeling of unity, joy and compassion. It didn’t matter that there were posters for different causes, or that some people were protesting FOR something while others were protesting AGAINST something. 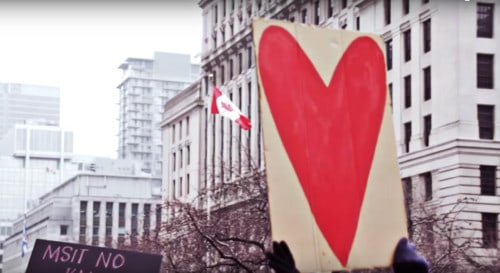 And even though Toronto’s march was smaller in scope than some of the others, even though we are Canadians with a degree of separation from the States, you could see that women, men and children from all walks of life had a voice for a moment in time. And their voices were being heard.

It felt like an honour to capture this unforgettable moment in the lives of the marchers. And I’m so happy I stood up. Got dressed. Picked up my camera. And captured the essence of the march.

It’s hard to say in words why making this film was important to me. I felt like I HAD to do it. Like I was CALLED to do it. As I mentioned, I’m not a massively open activist. But I felt as though something special was about to happen and that it was my job to capture it.

I needed to lend my voice to the caring, empathy, resistance, passion, anger, fear and love that is behind a movement like this. Seeing so many people come together to acknowledge each other, to see each other’s differences and to embrace what they had in common, was truly breathtaking. And to see the kids at the march, protesting alongside their parents, was a beautiful thing. Knowing they’re being raised to be accepting, to listen, to have empathy, to have a voice.

That. Is. Hope. And that’s why I made this film.

To say that I was nervous about putting this video out there would be an understatement. While it’s a film about empathy, we live in times where going public with this type of message can draw much negativity, bullying and rage. But I was compelled to create it and release it anyhow. The times simply called for this type of voice to be heard.

A natural introvert at heart AND a filmmaker, it’s never been easy for me to put my work out there, and this project in particular had my belly filled with butterflies.

But there was so much healing needed in the world, so I took this leap anyway. I needed to document a piece of the Women’s March in Toronto because it was beauty in motion. Empathy from and for every walk of life, every age, gender, race and faith. People were marching for things like women’s rights, equality and a movement towards unity. Many were also marching in protest against the new administration in the States; against the proposed reversals to the progress we’ve made in so many areas of women + human rights and the protection of the environment.

People looked across the proverbial aisle, saying: I see you. Please see me too.

I realize that daring to truly SEE another person may be a controversial thing to do these days. So please, be controversial.

I had to create this film because it wasn’t just about what happened in Toronto that day. It was about the courage of millions of people to stand together despite their differences.