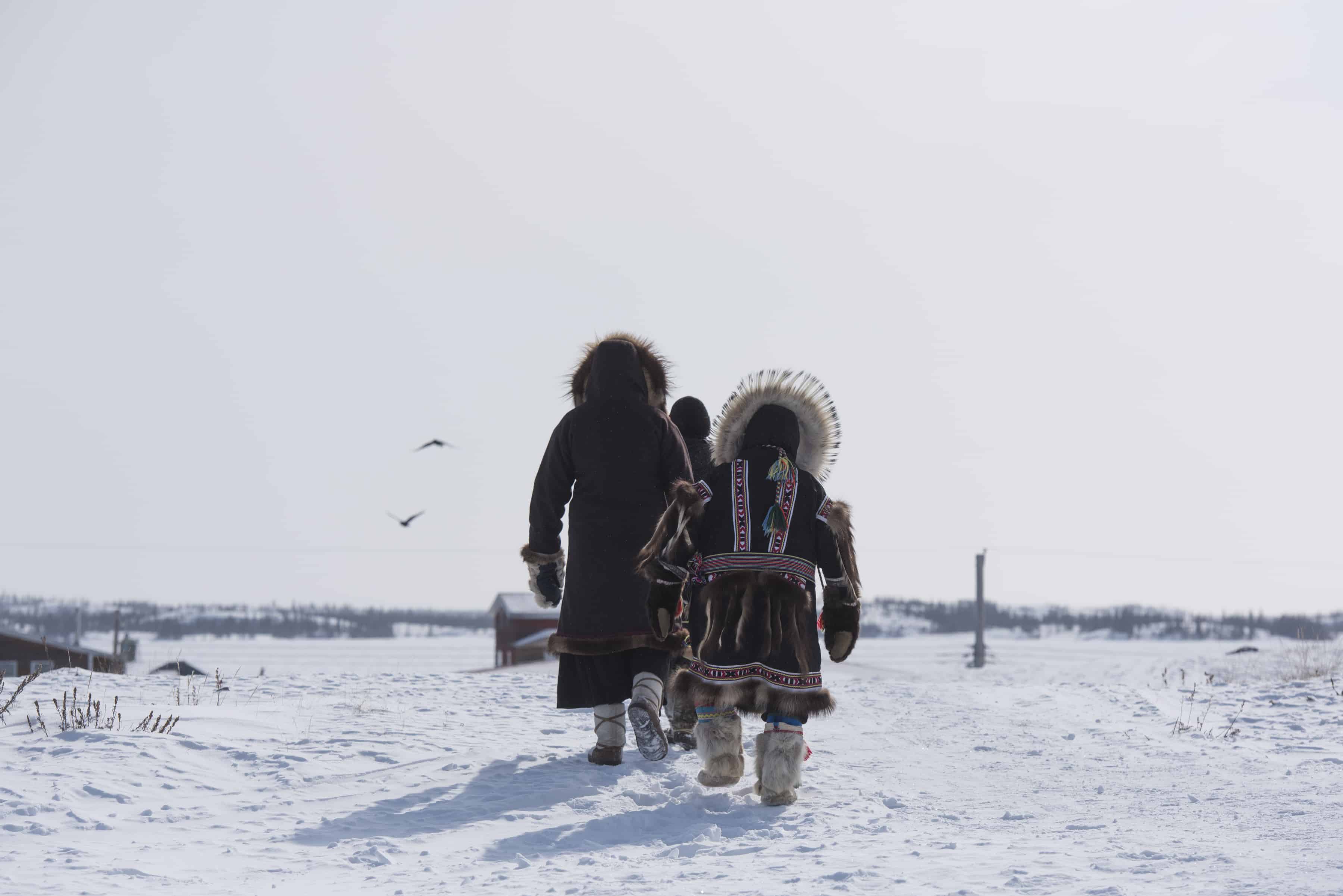 Have you ever seen a film that is set in both Afghanistan and the Canadian Arctic? I didn’t think so. For that reason, Marie Clements’ first narrative film, Red Snow, is refreshing, visually stunning, and totally unique. But the rarely shared perspective is what makes this film truly powerful. Fairly common, but seldom told, Red Snow tells the story of a young Indigenous man in the Canadian Armed Forces.
Dylan (Asivak Koostachin) is a Gwich’in soldier from the Canada’s Western Arctic, and while in Kandahar, Afghanistan, he’s caught in an ambush and captured by the Taliban.
There are plenty of reasons why Clements wanted to explore this subject matter, but the idea was initially inspired back in 2009, when she was scanning a photography website, and came across photos of Canadian soldiers in Afghanistan. “The faces of the Indigenous people there, from certain angles, looked a lot like the faces of Canadian Indigenous people,” says Clements, who is Métis. “I was curious to see what things we might have in common with the Afghani people, given that both of our cultures are ancient cultures, and have survived so many wars.”
The award-winning playwright set out to make her first narrative feature about human connection, or the bonds that aren’t obvious, but very much exist, “We see the differences before we similarities,” she says. “The motivation behind it is really about looking at people in the modern world who use the power of identity and culture to survive anything.”
Red Snow zooms in on what it’s like to be Indigenous, fighting alongside settlers, and examines the reasons behind that choice. “I wanted to explore where the armed forces identity sits with Indigenous soldiers, and how they feel. I understand that there are a lot of Indigenous people that do join so that they can benefit from receiving a higher education, or receiving a chance to be part of something that gives you the chances to have a better life.”
While Indigenous people from all over Turtle Island are part of the Canadian Armed Forces, Clements has a lot of family from the Arctic, so chose her character to be from there, “I really wanted to honour that [her ancestry], but also was looking at a character that comes from a land that’s really hard to survive on, and live on, and see how they could use that to help survive other things.”
Dylan’s experience with blizzards, and navigating a harsh barren land, is what he draws on when he finds himself in treacherous conditions in Afghanistan, leading a Pashtun family out of harm’s way. “I do think that there is something similar, in an abstract type of way, with countries that have deserts. There is something in it that is the same, but completely different,” says Clements, who shot the film entirely in Canada, in both the Northwest Territories and British Columbia—finding the more desert-type Afghanistan landscapes in areas surrounding Kamloops.
Red Snow moves between four languages: Gwichi’in, Inuvialuktun, Pashto and English. It was a creative decision that was important to Clements, “I thought that if we were going to look at these three cultures, seeing it each other, that it made sense to go back to their original languages. So much of the story does take place on the land, and the language of those lands is important.”
To ensure accurate representation, Clements’ had cultural keepers on set to help with every decision. “It grounded us in the reality of the world that we were building and colliding, to make sure everything—from the smallest detail of a teacup—was true. It was a very detailed process, that encircled not just the cast and elders but all the artists, the designers, the crew. It  was very layered in that we were all aware that it was a challenge to shoot, but also that it was a privilege to work together.”  A beautiful piece of art that serves as an important reminder that we’re more alike than we think.
This piece was first published in March for the theatrical release, which was cut short due to COVID-19. Red Snow is now available to download on Apple TV. Watch the trailer now.
Tags: Afghanistan, Arctic, Film, Marie Clements, Red Snow