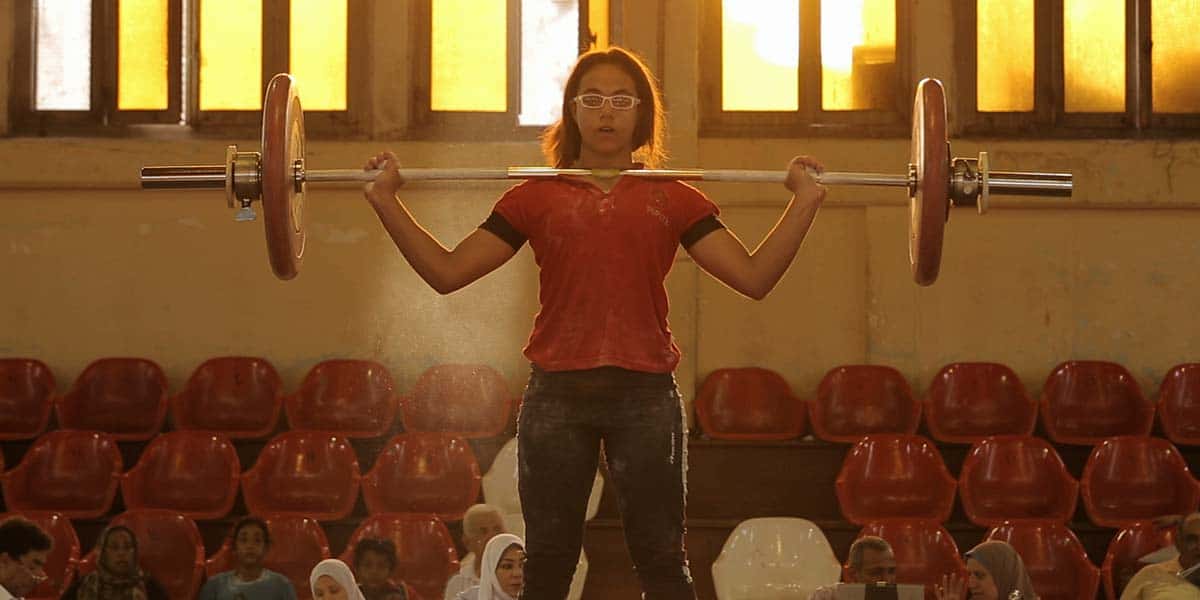 "I tried to capture some of the harshness of this world in this film. I was so amazed by the determination of these young girls to overcome all of these things ... to train in the dust."
Film

"I tried to capture some of the harshness of this world in this film. I was so amazed by the determination of these young girls to overcome all of these things ... to train in the dust."

It took Mayye Zayed six years to make Lift Like A Girl, four of which were spent in a dusty and noisy vacant lot in Alexandria, or the location of Captain Ramadan’s training camp, where young Egyptian girls become the next weightlifting champions.

“I didn’t know how anyone could focus in such a crazy place. It’s so loud and noisy,” says Zayed. “I found the place fascinating and I felt that it was a place that needed to be part of a film, a feature documentary.”

Zayed was introduced to Captain Ramadan as most of Egypt was—the father and trainer of Nahla Ramadan, who shocked the world in 2003 when she became a world champion weightlifter. “With the very little resources that her and her father had, she managed to achieve her dreams. Nahla became an icon in Egyptian sports. Everybody knew her and everyone was cheering for her,” says Zayed, who was captivated and inspired by the story and followed it closely for years.

Zayed spent time at Captain Ramadan’s training school before deciding to focus her lens on Zebiba, one of the younger girls at the beginning of her weightlifting journey. “She had this very unique relationship with Captain Ramadan. They shared this  complex relationship. They are less like a coach and trainee and more like a father and daughter and that attracted me,” she tells me, sharing that Captain Ramadan also marked Zebiba as the student with the greatest potential.

Zebiba was just fourteen when Zayed began filming her. She is quiet and determined and watching the dynamic between her and Captain Ramadan isn’t always easy to observe. He yells at her and calls her names like “Little Shit” when she doesn’t lift 75 Kilograms above her head, but there remains a quiet and mutual respect between them. It’s a documentary that definitely wades into a difficult grey zone, revealing a unique and complicated relationship.

“I tried to capture some of the harshness of this world in this film but I was so amazed by the determination of these young girls to overcome all these things. To train in the dust,” says Zayed, explaining that she didn’t always believe in Captain Ramadan’s tactics. “Of course sometimes I would disagree with how he does that, but I felt that it was my role as a filmmaker to capture this reality.”

Beyond being fascinated by the subjects, Zayed was also compelled to make the film because she loved how the girls defied stereotypes. “I was lucky enough to grow up in a family that believed in gender equality and my parents were always very supportive to my decisions but I know that not all girls had this experience,” says Zayed, sharing that the same opportunity was found at the decrepit training camp. “There is no discrimination of any kind and I wanted to capture this because of the training side. The way the girls train breaks stereotypes that the whole world has about women. It’s not common, especially in Egypt.”

With very little equipment, the girls use one another to help train—jumping over each other to create hurdles. The traffic is constantly heavy, there are stray dogs wandering the streets, the air is dusty and polluted, and yet their determination is unwavering.

In the early months of filming, Zayed questioned Captain Ramadan’s fierce commitment, assuming he must be compensated in some way, but realized that his drive was completely driven by passion. “He’s just doing it because he believes in it and he’s passionate about it. For anyone who has a big dream, passion is the only way to get you there.”

Zayed’s film premiered at TIFF in 2020, a huge triumph for the director. “I couldn’t believe when I got accepted, especially in such a year. I knew they had reduced the selections, I was one of the lucky ones who got to screen my film,” she says smiling. Lift Like A Girl has since screened in festivals all over the world. At the time of our interview it was opening in theatres across Egypt, and is now available to watch on Netflix. “I’m amazed at how people relate to the story. And how they like it and how it touches then on different levels.”

Like Captain Ramadan, Zayed’s commitment to the project has been driven by passion since day one. Lift Like A Girl is proof that magic can be born in the most unlikely of places and passion, determination and will are the strongest of forces.