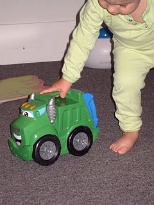 ME: What do you want to be when you grow up?

CY: a garbage man!
Ok, this conversation didn’t actually happen. But I have a sneaky suspicion I better start mentally preparing for it now.

You may recall, one of Cy’s very first words was ‘garbage.’ No idea how he picked this one up, but he did, and it stuck. He loves pointing garbage trucks out on the street, and he walks around the house picking up pieces of lint off the carpet and throwing them away in the garbage. And where most kids go to bed with their favourite stuffed animal or cozy blanket, Cy now insists on bringing his – you guessed it – garbage truck.

But hey, the City of Toronto is considering contracting out its garbage services. Who knows, it could prove to be a lucrative venture still.