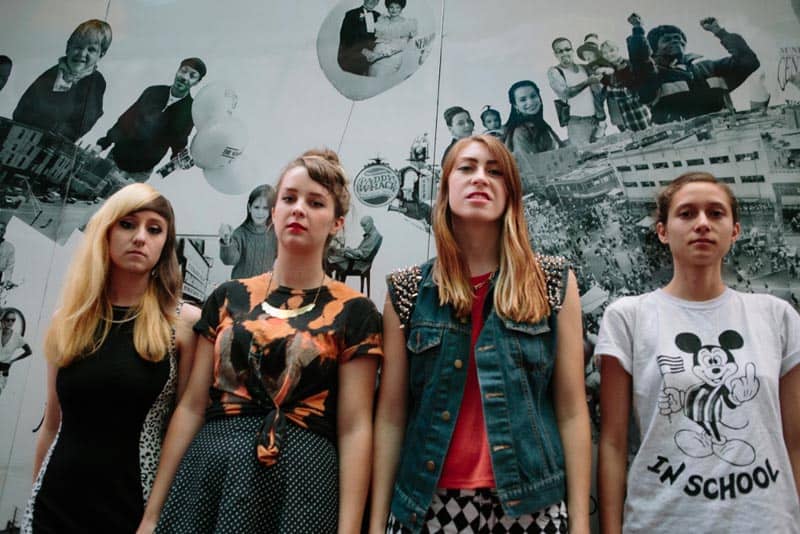 A band that can garner buzz based off of a cassette demo and one EP is worth listening to. That band is Potty Mouth, an all-girl four-piece whose sound is a sort of late-70s-punk-meets-90s-lo-fi. Still, the girls have a sound all their own and are putting Northampton, MA on the map for something other than being a college town. Their debut LP Hell Bent comes out September 17 and we chatted with singer/guitarist Abby Weems about everything from the new album to Riot Grrrl comparisons to 90s nostalgia.

SheDoesTheCity: First off, what inspired you to start Potty Mouth?

Abby Weems: We all just wanted to try something new! I had never been in a band before and the idea of forming an all-girl band was something that I had always been interested in.

SDTC: What’s the music scene like in Western Massachusetts?

AW: There’s a really diverse art/music scene in WMass that I think comes from being a college town. It seems like everyone has at least a few projects going, and people are always so dedicated to what they’re doing.

SDTC: What would you say are some of the best things to come out of the 90s, music or otherwise?

SDTC: People seem very eager to categorize you as Riot Grrrl. Do you think that just comes with the territory of being an all-female punk band?

AW: As much as we all love Riot Grrrl it is frustrating to be confined to one category like that, especially when it’s based on our gender and nothing to do with our music.

SDTC: Is there a special story or moment from your current tour you can tell us about?

AW: Our first show was for Summer Screen in McCarren park which was so much fun because there were tons of people, free cotton candy, and that night they played The Craft!

SDTC: What are you favourite songs to listen to on the road?

SDTC: What can you tell us about your upcoming album, Hell Bent?

AW: The themes/lyrics are more serious on this record, and our song writing style is much more defined than the songs on [our other EP] Sun Damage.