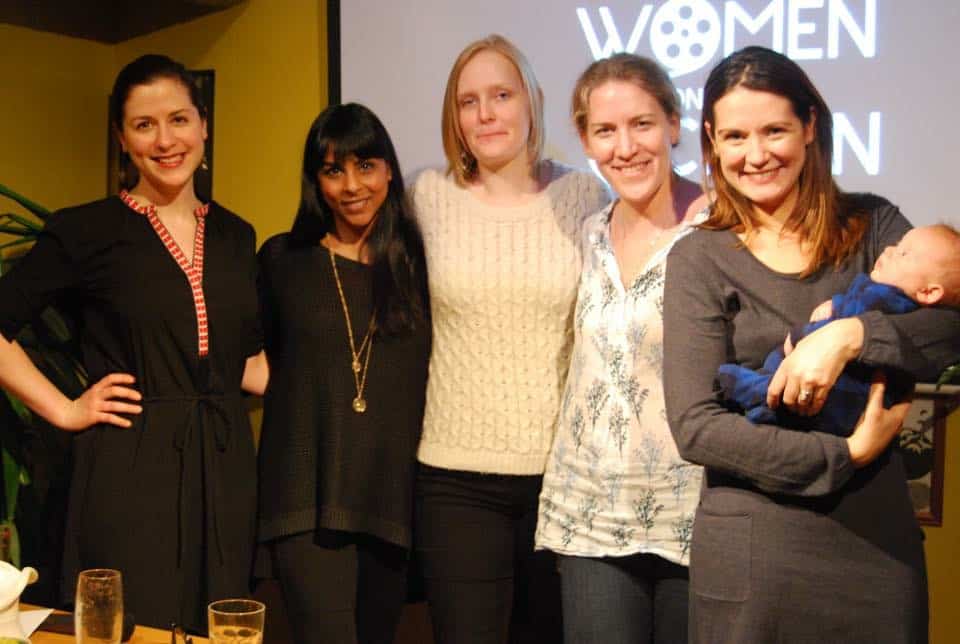 Meet the Women From Women On Screen

“Women in Hollywood are making strides, but still lag behind men.”

Ugh. Headlines like these were way too common in 2015. But fortunately, there are initiatives like Toronto’s Women On Screen that are seeking to change that.

Women On Screen (WOS) was founded in 2014 by Lauren MacKinlay, Farah Merani, Ciara Murphy and Natalie Lisinska – actors, producers and creators who’ve been working in the Canadian film and television industry for a number of years. They were working together on a writing incubator focused on female-driven content when the quartet felt the urge to continue that mission, but also wanted to expand upon it by including women on all sides of the camera.

Since its inception, WOS has organized an eight-week Short Film Incubator, has taken part in the Toronto ACTRA Women’s Committee Toolkit 2.0, hosted a Salon Series, and is now just wrapping up their Web Series initiative (which yours truly has had the honour of being a part of). Through the eight-week program, writers have received guidance from a slew of mentors on everything from business to marketing to pitching (and we have our own cool hashtag too: #WOSWSI).

I chatted with the women about why it’s important to see women in leadership positions both on and off the screen, their ultimate goal for WOS, and which female stars are killing it.

Why is it important for people to see women in leadership positions both on and off the screen?”

“If you can’t see it, you can’t be it.” It’s important to see women in all facets of the industry, from the boardroom to casting breakdowns to a call sheet. Having strong examples that inspire women to believe in their potential is at the very heart of our organization. Having a greater array of voices promotes a broader spectrum of storytelling, as well.

Tell us about the current incubator that you are running now. Why web series?

With the increased demand for digital programming, we recognized that web series are an accessible entry point for filmmakers. Also, there are no creative limits in this landscape. It is still being defined, thus making it a great way for writers to find their unique voices. We’re excited by the possibility that participants could leave the incubator with a polished script and a better sense of the market for web series.

What is your ultimate goal for WOS?

Our ultimate goal is to see the day where an organization like ours is no longer needed. Until that day comes, we will continue to develop and run programs that will support and foster women’s careers. Generally speaking, we are committed to widening our web presence, while connecting with likeminded organizations both locally and globally, and working towards gender equality in the entertainment industry.

What are you most proud of thus far?

The feedback that we have received from our participants is what keeps us going. To know that our programs have made them brave enough to champion a script and take it into production, or that a discussion has made them realize that they were being taken advantage of in their workplace, or just to hear that the ideas presented in the incubator have made them better writers. Anything that helps our screen women exude the confidence is what makes us proud!

In terms of female talent right now, who do you think is killing it right now?

Funny women are ruling the world right now! Tina Fey, Amy Poehler, Mindy Kaling, Amy Schumer – all of these hilarious women are taking feminist issues and making them understandable, entertaining, attention-getting and accessible.
Also, Geena Davis and her institute are effecting significant change from a policy perspective in ways that are more than just discourse. Tatiana Maslany is an exemplary Canadian talent who is proving that women are capable of creating varied and complex (and kickass) characters. Then there are executives and showrunners like Amy Cameron, Tassie Cameron and Stephanie Morgenstern who are putting women’s stories at the forefront and from perspectives that are not often heard.