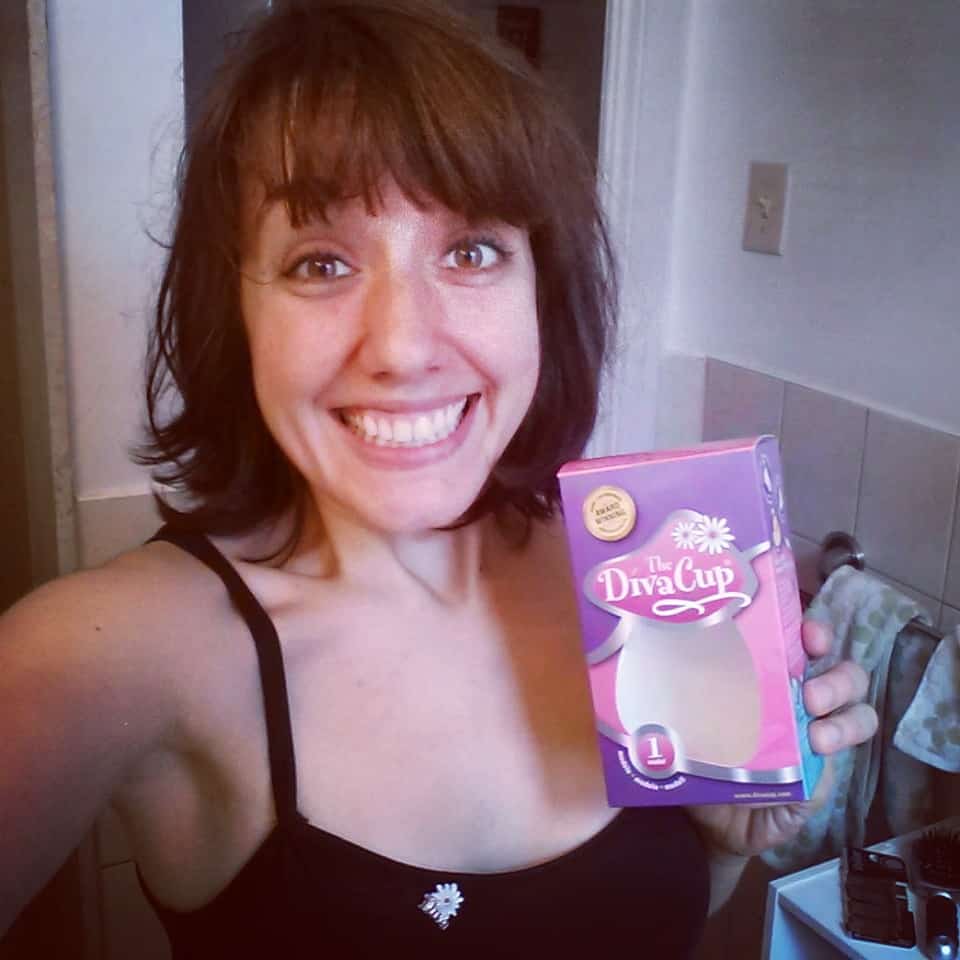 HOW I LEARNED TO LOVE MY MENSTRUAL CUP

Three months I ago I began wearing/using/flauntin’/livin’/lovin’ a menstrual cup. If you are currently asking “WHAT IS THIS MENSTRUAL CUP CONTRAPTION I AM SO CONFUSED I DON’T KNOW WHERE OR WHAT I AM” let me explain this magical device to you, easily perplexed reader.

A menstrual cup is a silicone apparatus that is inserted into one’s vagina and then collects one’s blood which one can then dispose of or use to paint with or film a low-budget horror movie. You can reuse the cup an endless amount of times (up to 10 years, although some cups recommend replacing annually or every five years) which equals mega environmental friendliness.

Before my period blood bought a house in Cup Town, it had made a quick stop over in Tamponville and was previously a permanent resident in Pad City. Due to my overly voluptuous hymen, the sanitary napkin was always my feminine care product of choice, as tampons had been known to get trapped inside my microscopic vagina. After losing my virginity at 21-years-old, I attempted the cotton wad once more but found it consistently uncomfortable and consistently falling out of me when I ran aggressively/walked slowly/sat still on a chair.

I know there is a learning curve and I am not the only woman to be born on this planet to struggle with aforementioned insertion. But I thought by the time I was 27-years-old I would be able to figure out something that most 14-year-old girls can do in their sleep. But we’re all on a path and that path for me was continuing to wear pads until yesterday (AKA I forgot my menstrual cup at home yesterday and wore a nighttime pad during the day IRL).

When I first heard about the menstrual cup I was, to say the least, skeptical.

My initial reaction was: “It does WHAT? Hahahhahahahhaha.”

“I AIN’T PUTTING THAT MACHINE INSIDE ME NO WAY EVER GOODNIGHT,” was my second.

“Hahahaha still laughing about how it does that so weird,” was my third reaction.

I thought it was hippie-dippy nonsense and I was plenty happy with my winged pads soakin’ up my shed lining. But my mind began a-changin’ when I started a podcast about periods, called The Crimson Wave, with my fellow comedian/best pal/sister-wife Natalie Norman. Suddenly, I was discussing the menstrual cup NON-STOP. People were asking me what it was/how it worked/if I recommended it and I couldn’t honestly answer any of their questions. I had read about it and seen it on the internet TV but I don’t think at this point I had even actually met a menstrual cup in person yet. All of the experiences I had with it were second-hand. But  after calculating that 90% of women I spoke to loved it and only 10% hated it I decided that I should… maybe…. possibly… give it a whirl… or an attempted whirl… or two dozen whirl attempts.

I promised myself I would get one the next day and then I put it off for months. “I’ll do it next cycle!” I kept declaring. I would see it in a store and think “oh, great, they sell it. This is perfect for when I buy it which is not today.” Then I would sprint out of the store, empty-handed, in a sweaty, yelling panic. Was I scared of trying something new? Not at all but also YES WITHOUT A DOUBT I WAS PETRIFIED. As already mentioned, my insertion experiences had not been pleasant and I had no interest in having another. The tampon wouldn’t budge.  So why would the menstrual cup/MY FOR SURE NEMESIS be any different?

Then, one day, I gave tampons one last whirl and insertion was a blissful success. A month later, I did it again and BAM. INSERTION ACHIEVED. I was on a roll. Was I more skilled at handling my vagina? Was it all of the casual sex I had been having? Had my body gotten chill with age and decided to make amends and not try to kill me any longer? I had no clue what influenced the shift and I didn’t care. I was just thankful that it was happening.

After two months of tampon-related achievement I decided I was ready to take things to the next level. I headed to a health food store, bought a menstrual cup and then proceeded to immediately not use it for another two months. FYI I LIVE for baby steps. But then, one fateful period, I took the plunge. I cracked open the box, whipped out the feared cup, read the instructions, folded it and shoved it inside.

And by some bloody miracle it slipped right in. Without an ounce of difficulty. I posted about my womanly stepping stone on social media, then went out that evening to a show where dozens of my friends were congratulating me on my cup triumph. “It looks great on you” they would say (not actually seeing anything since I was fully clothed but sensing that the style suited me well). The best part was that it didn’t leak! Typically when you first begin using a menstrual cup it takes some time to learn how to position it correctly inside you and leakage is a natural consequence of THAT learning curve.

Since that remarkable day, the cup/MY FOR SURE SOULMATE has changed my life in ways I couldn’t have imagined. For example:

Plus, there’s the added bonus of getting to feel super cool ‘cause the menstrual cup is one of the hippest feminine care products around. It’s the hottest accessory for every season. If you haven’t yet, give it a try! I know it seems scary and hippie-dippy nonsense but know that I was once an unbeliever and look at me now. My vagina could not be happier.