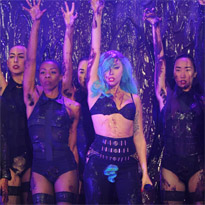 MMVAS 2011: The night I ditched the press room and joined Selena Gomez fans in the alleys off Queen St.

There was a time, not long ago, when the MMVAs were sort of twofold: Outside, there were young teens screaming on the street and inside Much headquarters, there were adults getting drunk. Press, sponsors, media buyers, Much execs, LA publicists and Toronto notables (who had nothing to do with anything) mingling with the likes of Sam Roberts or Sum 41. Between trips to the open bar, guests would intermittently hop on the balcony for a drag of a smoke and peek at a performance, but mostly we just cackled at one another with self-serving praise.

Once the recession hit, someone clued in that the gluttonous adult party was an expense that could be axed. Really, what person, perverts aside, over the age of eighteen is interested in Miley Cyrus or Selena Gomez? Right. So, Much made it bigger, better and all about the fans. As it should be. But alas, for someone who writes about a scene, an event atmosphere and pulse, a windowless locked-in press room isn’t, perhaps, the best place to soak it all up. After six years of being on the inside, I decided last night, to ditch the press room and hit the streets to feel the rhythm of the night. I wanted to be with the kids, the cops, the sweat and the tears.

Packs of high school students were strewn through back alleys, enjoying every bit of freedom the hot and chaotic night allowed. Awkward boys sprouting mustaches held signs that read “HUG ME.” Girls smacked gum, texted and conversed, “Where should we go?” “I dunno, where do you wanna go?” “I dunno, where do you think we should go?” I stepped over piles of garbage, walked through clouds of marijuana smoke, watched as eleven-year-olds were hoisted onto their dad’s shoulders to get a view of, what, I don’t know….a lamppost? Bros brought their girlfriends, who wore crop tops exposing belly rings. Tweens scribbled “SELENA” across their forehead in hopes that the Disney princess would spot them in the thousands and say, “Hey girl, do you wanna be on TV with me?”

There were screams of delight, screams from cold energy drinks being pressed against unsuspecting bare shoulders and then the sharp screams of moms snapping, “I TOLD YOU TO STAY RIGHT HERE!” A few poor kids looked tired, lost and thirsty. But gee whiz did they have a story to tell! “AND THEN, we saw a LIMO and we couldn’t see inside but somebody said DRAKE was in it. And then this guy stepped on Sarah’s toe and then we were like, AHHHHHH!”

One wild child, so anxious to be closer to Gaga, busted through a police barricade. “OMG, she slapped the cop!” Onlookers cried. I did not see that part but did, however, hear a cop request a paddy wagon asap. (Isn’t that a term only in the movies?) Poor girl got hauled off by a half dozen police. Ah geez, what did you do kid? Imagine the phone call home. Fuuuuck.

Turning a corner, I spotted rabble-rouser Kevin Clarke, a notorious Toronto character best known for his filthy street sermons and consecutive, but unsuccessful, years running for mayor. He called me some disgusting names, I can’t repeat, and then climbed a parking meter to tell everyone how much they sucked.

I pushed, got squished, got mouthed off, had fliers for all-ages after-parties slammed in my hand, got called a hipster by youth, walked through a stream of pee, had hot girls breathe hot dog in my face and accidentally stepped on a boy’s nose stud, “Ma’am, I think you are standing on my stud.” It was colourful, noisy, smelly and dirty. And I loved it. What can I say? I was born this way, hey!

Who won what? I dunno. Ask your niece.

Teens today have wicked style. We are so jealous of their steez.