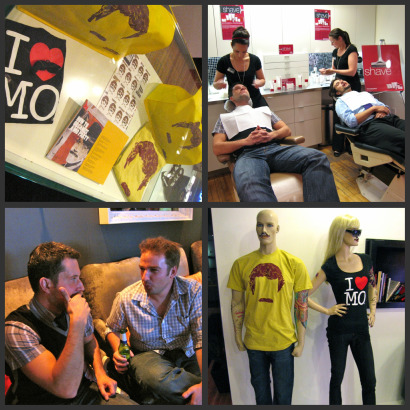 Movember Is The New November

I didn’t expect to leave a fundraising campaign launch wishing I could grow a moustache, but I guess there’s a first for everything.

Wednesday, October 14, 2009 marked the launch of the 3rd annual Movember Campaign in Canada. The event was held at the trendy LoKi Lounge on King Street West in Toronto, and fittingly so – because this fall, moustaches are in.

For some of us, moustaches conjure up images of Ned Flanders, Tom Selleck, or the Monopoly guy – but Co-Founder and CEO of Movember, Adam Garone, hopes that this “hairy ribbon” will have the same global impact on cancers affecting men that the pink ribbon does on breast cancer. The idea behind the campaign – and the aptly named “hairy ribbon” in particular – is to get men and women talking about prostate cancer and men’s health issues.

Movember is a global charity event that challenges men to grow moustaches (or ‘Mos’) for the month of November. Whether on their own or as part of a team, male participants, known as ‘Mo Bros’, start the month of November with a clean shaven face, and then grow their stylish ‘stache throughout the entire month – raising funds and awareness for Prostate Cancer Canada. Women, or ‘Mo Sistas’, can get in on the action, too – by getting the word out, recruiting Mo Bros to participate, and collecting donations for Prostate Cancer Canada. I spoke with one such Mo Sister – but not just any Mo Sister – 2008’s Miss Movember, Rachel West, who simply said, “I’m awesome” – and to be honest, she is. Though not sporting a Mo herself, she supports her boyfriend and encourages friends to take part in this Mo growing crusade each year. She was crowned Miss Movember last year at the costumed Gala Parté , where Mo Bros dress up as their favourite mustachioed character (fictional or non), show off their full grown ‘staches and compete for the coveted title of Man of Movember.

Back to the campaign launch. The lower level of LoKi boasted plush seating in candle-lit corners, beckoning me off my feet to take in Movember movies playing in ornately framed flat screens. Hors oeuvres were never in short supply (guests enjoyed crowd-pleasers like spring rolls, vegetarian or grilled chicken sandwiches on thick foccacia buns, and mushroom crustinis), which is always a plus at an event catering to the post-work, pre-dinner crowd who also happens to be enjoying a Canadian Club signature Movember cocktail or two. Upstairs, Mo Bros enjoyed facials courtesy of Movember sponsor Dermalogica, while other guests browsed Mo swag that was artfully advertised in glass display cases around the room.

I had the pleasure of speaking to Stepan Pruchnicky, who played a key role in bringing the Movember movement to Canada in 2007. When asked what he likes most about participating in Movember, he said, “I do like growing the ‘stache. Movember gives virtue to something that many people find borderline offensive… and makes it awesome.” He told me that the buzz this year is that Movember in Canada will “see the most growth – no pun intended,” as internationally, the third year of the campaign tends to be one of exponential expansion.

After Mark Daily (CityNews anchor, prostate cancer survivor, and MC) and others close to the cause spoke, I found myself wishing I too could grow a Mo in support of Movember. Thankfully, a split second later I recalled that my inability to grow facial hair did not have to stand in the way of me showing my support this cause. Indeed, the key to getting involved is hiding right under our noses (pun intended) – on the Internet. To find out more about how you and your friends can get involved – and to learn everything you ever wanted to know (or not know) about moustaches – go to www.ca.movember.com today.