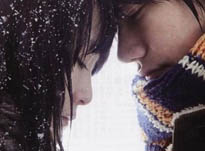 Murakami fans: FREAK OUT! (You know, by writing poetry, gazing longingly at each other, and playing somber records.) Norwegian Wood opens March 2nd

Norwegian Wood, the film based on Haruki Murakami’s beloved novel, has been beloved by audiences in Japan for over a year, and now it’s FINALLY coming to Canada. Opening March 2nd, this film follows a very peculiar and morose love triangle.

Set in Tokyo in the 1960s, Toru Watanabe his best friend Kizuki and Kizuki’s longtime girlfriend Naoko, are inseparable. But when Kizuki kills himself, it shakes the foundation of their close group, and the pain reverberates through Naoko and Watanabe’s lives. Watanabe begins university closely following the suicide, and he and Naoko grow close over the next year. Things become complicated as their feelings for each other escalate, mirrored by Naoko’s growing instability. Wrestling with her demons drives Naoko to find sanctuary at an institution deep in the country, and Watanabe remains devoted to her, visiting whenever he can, under the supervision of her roommate and mentor Reiko.

While Naoko fights to hold on to reality, Watanabe is pursued by Midori, an insatiable young woman whose charisma hides deep tragedy. Their relationship begins as a sexually charged and flirtatious friendship—they discuss their respective significant others and their attraction to one another with shocking frankness. But, inevitably, their connection becomes more complicated, especially as Watanabe begins to uncover the many struggles Midori is masking with her me-against-the-world attitude.

The film, like the novel, is poetic and beautiful. Slow paced and subtle, it is a visually rich piece with stunning and raw performances from the young actors. Fans of Murakami’s work will love this cinematic ode to his most popular novel.