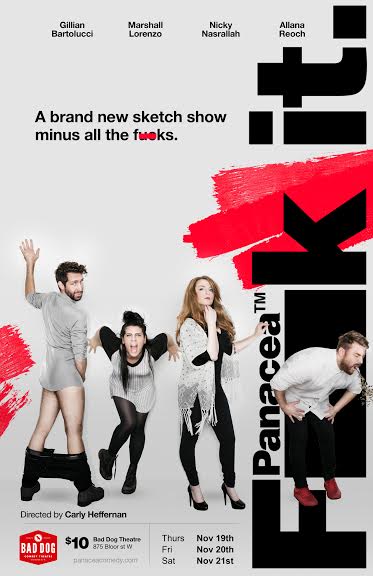 Full disclosure: Allana Reoch, one of the writers and performers in Panacea’s F*#% It, is one of Shedoesthecity’s long-time contributors, and we love to promote cool things happening within our tribe. But here’s the truth: Allana is hilarious as f*#%, and we’re not the only ones who think her sketch comedy crew is skin-tight, out-of-sight.

NOW Magazine gave the Panacea self-titled sketch revue the glowing “NNNNN” and heralded it as one of the “Top 5 Shows” at Toronto SketchFest. Their new revue digs deep,  revealing insecurities about life, love, failure, and dieting.

Written by Allana Reoch, Gillian Bartolucci, Nicky Nasrallah and Marshall Lorenzo and under the direction of Second City Alumna, Carly Heffernan, F*#% IT is a comedy that teaches you how to rock the self-doubt that plagues early adulthood.

In competition with your ex to see who is living the happiest life? Having trouble taking care of your body the way it deserves because wine just tastes so good? Can’t navigate the TTC? Join Panacea at Bad Dog Theatre on November 19th, 20th and 21st to shrug your shoulders, wash your hands of it all, and conclude that it ain’t yo’ business what anybody thinks of you, honey! Fuck it!

Tickets are 10 bucks. Spend a night laughing at all the crap that usually makes you paranoid and anxious. More details here.