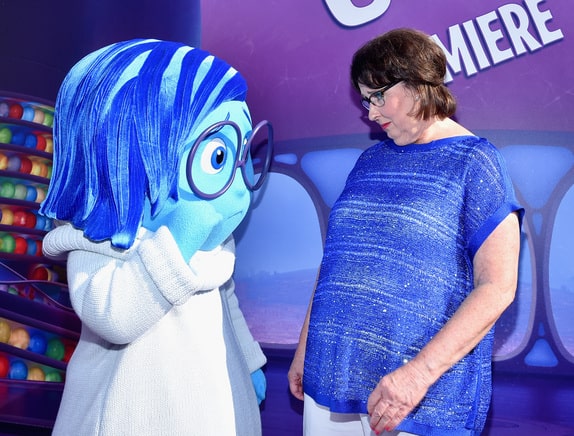 My Chat With Inside Out’s Phyllis Smith

The last time I paid much attention to a Disney film was when Aladdin was released in 1992. My sister and I would take turns holding the cassette tape insert to sing the lyrics to “Prince Ali” over and over. Each time, we’d add gusto, elongating the “Ali Ababwaaaaaaaa” as much as we possibly could. Since then, I have paid very little attention to Disney and Pixar.

I don’t know if it’s because I now have a son who will soon be watching films, or if I was feeling particularly melancholy, but last week (with zero expectation and a strong sense of curiosity) I settled in with a bucket full of Halloween candy to watch the animated feelings in Disney’s Inside Out. They blew my mind. It blew my mind.

By the time the credits rolled, a damp circle had formed on the throw pillow. Like the characters in the film, these were tears of Joy, Sadness and Fear. Inside Out manages to be both totally adorable and impressively complex, providing children and adults a new way to consider and communicate emotions, while also giving us knockout entertainment. While the feelings/characters Angry, Fear, Disgust and Joy all do superb jobs, it is Sadness who is the star. I quickly got in touch with Disney and requested an interview with Phyllis Smith, the voice of Sadness.

Smith, best known for her longstanding role as amiable Phyllis Vance in The Office, was lying on her couch in St. Louis when she got the call from director Pete Docter requesting a meeting. “I thought, Does he have the wrong number?” Smith chuckles. Her initial reaction to the idea that she’d play Sadness in the film was shock, followed by extreme happiness.

The story of Inside Out centres around 11-year-old Riley whose family’s recent move from Minnesota to San Francisco changes her from being a happy and goofy little kid into a forlorn and distressed preteen. For years, ‘the feelings’ inside her have become accustomed to her easy going temperament and predictable routine, but the move to a new city and new school has thrown all of them into confusion. How the feelings navigate their way through the turmoil is the most imaginative journey through a child’s brain. If you’ve seen it, you know that the number one question is: WHO DREAMS THIS STUFF UP?

Smith was quick to credit Docter: “He’s the genus behind this.” She then tells us where the initial idea was born. “He was looking at pictures of his little girl, happy and joyous, and then he noticed a picture of her all curled up in the corner looking cranky and upset.”

The film had already been in development for three years before Smith was brought in for a meeting. At the same time that she was doing secret readings for Sadness, Mindy Kaling was doing readings for Disgust and Amy Poehler for the lead role of Joy. With serious non-disclosure agreements, Smith would return to the set of The Office, and while rumours circulated in the press that Kaling was involved in the project, Smith couldn’t say anything about it. “I had to keep my mouth shut for the longest time.” A perfectly awkward situation for the perpetually awkward environment of The Office. 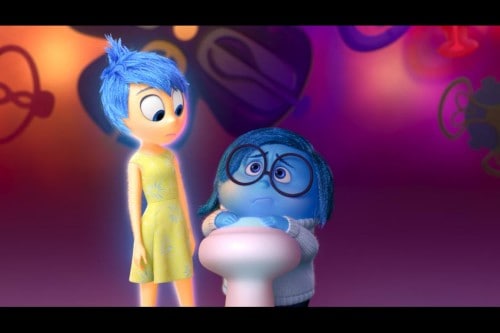 Once the talent was officially announced, many critics and Hollywood insiders were skeptic about the zany plot line and suggested that the major Pixar investment was poised to fail. Docter was also worried, as the original storyline partnered Joy with Fear, and Smith relays that something was off. “Originally, he had paired up Joy and Fear, and he decided that something wasn’t working with that combination. He was wandering around his house, thinking how sad he’d be if Pixar fired him when all of a sudden it dawned on him: he needed to pair Joy with Sadness.”

It was at this point that the character development for Sadness deepened. “Pete was the one who was able to pull out my insecurities and find different levels of her. She couldn’t just whine for 90 minutes – that would get old real fast! There had to be more levels.”

Since she joined the Pixar team, Smith has stolen the hearts of countless children. “I was at Target the other day, and a little girl came up and asked, ‘Sadness, will you sign this?’” Teachers across North America have also started referencing the characters when trying to help young students understand their feelings.

The little blue ball with glasses is very cute, but it’s the earnest way that Sadness handles challenging situations that makes her so loveable. “Joy realizes that Bing Bong needs to talk about his feelings to feel better. Sadness knows that he needs someone to listen to help him.” It’s a scene in the film that is as touching and poignant as it sounds.

Inside Out may be the first animated film that has us (kids and adults) finally acknowledging that every feeling has its place, and that being happy all the time isn’t normal. Sometimes we need to cry to feel better. Sometimes our sadness needs to be heard.

Inside Out is now available on DVD/Blu-ray and digital download. 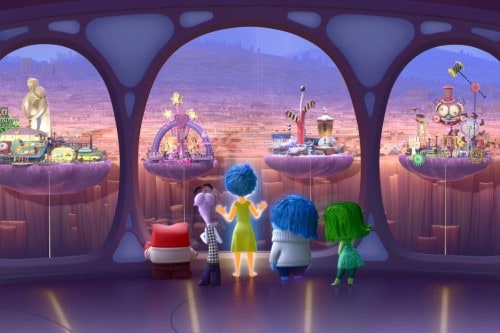