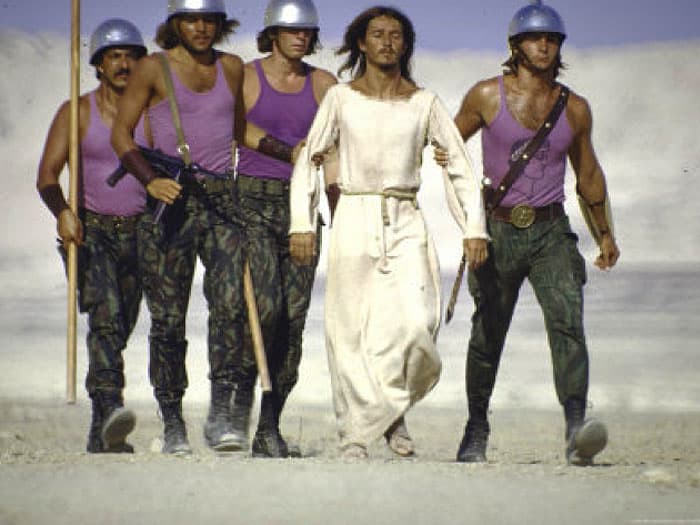 Those were blissful times. I didn’t have to construct a real opinion on anything. Why would I when all the answers I needed were in a book?

My Conversion To Jesus Christ Superstar

It might surprise you to learn that you’re in the middle of it right now. That’s right— it’s Holy Week. Roughly a third of the world’s population will soon be celebrating the resurrection of their saviour. Another, smaller demographic will be on the hunt for eggs brought by a rabbit so maladjusted, s/he thinks nothing of leaving behind hordes of her/his own chocolate. And, up until this year, it meant that I would try to evade my father as he watched a movie that has frightened me to my very core since I was a kindergartner: Jesus Christ Superstar.

I should explain. Having been was raised in an Irish-Italian home, I was all about Jesus. I was a Mass-serving, choir-singing, Gospel-reading, interpretive-dancing, happy little heaven-raiser. Those were blissful times. I didn’t have to construct a real opinion on anything. Why would I when all the answers I needed were in a book?

Speaking of said book, my dad organized a family Bible study for Lent when I was about 13. Things were going well, until I started to notice the discrepancies. Didn’t Jesus say x in this gospel but say y in another? I’d wonder. My dad, an open-minded man, encouraged me to ask questions. This was the beginning of the end.

Questions begat doubt. Doubt begat debates. Debates begat a quiet scepticism and slow erosion of the faith I’d grown up with. Erosion begat degrees in philosophy and English Lit, where it pays to analyze texts beyond the point of absurdity.

I don’t subscribe to any particular religion anymore. If anything, I guess you could say I’m an optimistic agnostic.

It had been about 10 years since I’d really considered Jesus, let alone contemplated a musical about him.

Then I met the man who’d later become my husband.

Early on in our relationship, he told my father that he loved the film Jesus Christ Superstar, one of my dad’s favourites. My dad listened to the album often, religiously (pun very much intended) watching the movie at least once during Holy Week. Certain that my then-boyfriend was merely trying to get in my dad’s good graces, I thought nothing of it (though I did consider the Freudian implications of being attracted to someone who so closely resembled my father—at least in his tastes for psychedelic cinematography).

Thing is, JCSS has always terrified me. Try being a 6 year old and accidentally walking in on the scene where Jesus gets flogged. Enjoy the therapy. I found my dad’s vinyl copy of the original recording a few years later and read over the lyric sheet. Someone decided it would be fun to repeat the line “Crucify him!” about a million times. Rattled, I put the sheet back into the record sleeve, hiding it between other records, hoping my dad wouldn’t find it. When he invariably did, I hid myself.

My dad, no doubt, surmised that I thought I was too cool for this musical. Actually, I was just too cool to tell him I was concerned I might wet my pants.

Until this year, thanks to my husband devising an ingenious plan to get me addicted to this rock opera.

His approach was both systematic and thoughtful. He began by playing a few clips of his favourite songs from the movie off of Youtube. He casually drew comparisons to other musicians I like. “Doesn’t this sound like Tori?” he asked. “How much did Rufus Wainwright rip this off?” “I don’t hate this,” I told him, taking the bait.

He then put Act 2 (aka Side B) of the musical on my ipod without telling me. After many listens, I sheepishly requested that he put on Act 1 as well. I became obsessed. As soon as the last note of the last song played, I would cue it up to start it all over again.

I think he knew his plan had worked when, one Friday night a few weeks ago, I asked if he’d mind if we ditched the idea of seeing a movie, opting to instead have a two hour walk home while singing nearly every song from JCSS . Well played, husband.

Why the drastic change of heart? Well, I listened to enough Nine Inch Nails in high school to no longer find the opening riff of “Heaven on Their Minds” too sinister. From vaudeville to Motown to rock, a myriad of genres are covered in the soundtrack, and I happen to like them all.

But it’s really Tim Rice’s lyrics which re-imagine Jesus’s final days that spoke to me. (I know, right? Tim Can-You-Feel-the-Love-Tonight-from-the-Lion-King Rice is responsible for this? What happened, T-bone? You used to be so great.) Much like 13 year old me, it poses more questions than it answers.

What if Jesus was an indecisive, angry, exhausted, emo-kid who didn’t really try to defend himself when put on trial? What if Mary Magdalene was a not only a loyal follower of Jesus, but also a confused woman in love? What if Judas was actually a well-intentioned, framed pawn, mourning the end of his bromance with Jesus when all he really wanted to do was keep Jesus’ message alive?

I now take comfort in the idea that my dad watches this every year. I think it means that on some level, he must ask himself these questions too.

And that, had we been born at the same time, maybe we would’ve gotten our philosophy degrees together.