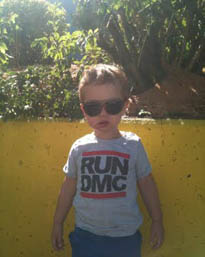 When it came time to end our year-old nanny-sharing arrangement with our friends and their son, there was an element of sadness in the air the entire last week. We brought these two little boys together, had them spend almost every waking hour together, and essentially forced them to become friends. Not surprisingly, they became just that. The best of friends. They learned to walk together, to eat together, and to play together. Well, if you consider stealing each other’s toys ‘playing.’

Sure, there were moments of despair – biting and hitting, mostly – but there were also tons of hugs and kisses. Although it’s hard to say what kind of bonds of friendship can be really formed when one’s vocabulary consists of grunts, gurgles and the ‘gimme my car back’s,’ but suffice to say it’s enough to communicate love.

We figured that when it came time to separate them, which eventually we always knew we would, we’d do it suddenly and without warning. But perhaps we didn’t consider the void that the separation would leave.

Secretly, I had hoped the excitement (or trauma) of the first week at daycare would distract Cy from the fact his attached-at-the-hip buddy had suddenly disappeared. Was I hoping he wouldn’t notice? Kinda.

It was hard. Would he understand if I told him he’d never be sharing a nanny with him again? Would be ‘get’ that his days of spending every single weekday with his best friend were over? Would he be just as devastated as I was when, leaving Poland, I had to suddenly say goodbye to my best friend, forever? Probably. It wasn’t going to be forever, but that’s probably what it felt like.

Even though our friends live near by, I figured it would be best to keep them apart for the first little whil,e at least while they adjusted. Why tease him, right?

But after two months apart, we brought the boys together again for a mini-playdate in the park.

Like one of those cinematic, playing-out-in-slow-motion and punctuated-with-a-swelling-melodromatic-musical-score moments, the instant the boys saw each other across the park they ran towards each other with huge grins on their faces, calling out their names, and threw themselves into each other’s arms in an epic hug finale. The bestest of friends together again. Awww.

I don’t think I’ve seen either of them happier.

They may not be able to clearly pronounce the word, but clearly they know a good friend when they see one.