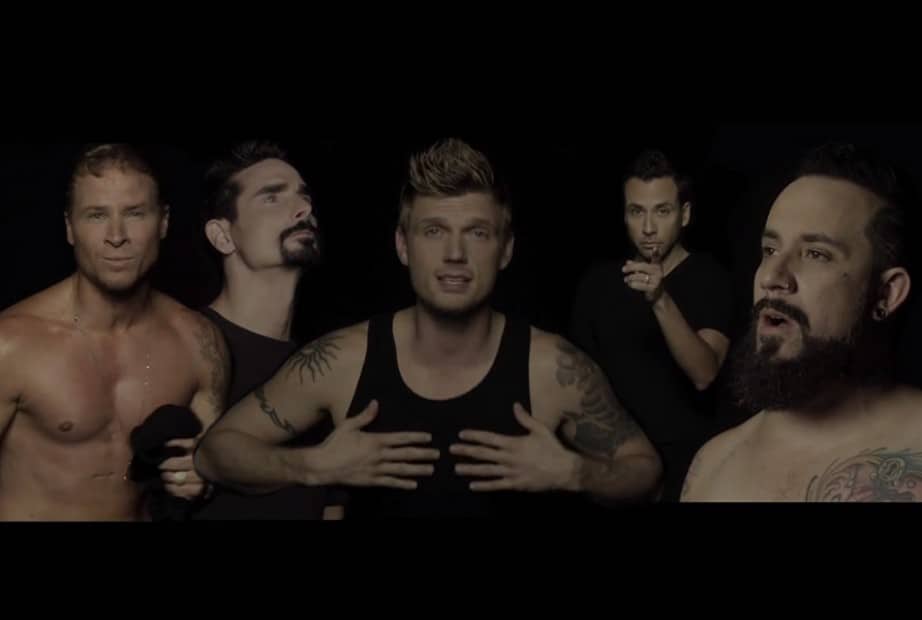 New Backstreet Boys Documentary Will Play Games with Your Heart

Like any other twenty-something girl with a wi-fi connection and a heart, I have not been immune to reports of a new boy-band themed documentary sweeping the nation. The boy band in question is, of course, the Backstreet Boys, a once famous quintet of dance-happy man-children who have individually graced the sexual fantasies of all girls (and some boys) who came of age around the millennium.

It’s been twenty years since The Boys sang their first, perfect pubescent harmony under the supervision of infamous scam artist Lou Pearlman, and like all of you, my musical sensibilities have become somewhat more refined in the meantime (unless you count the “90’s Pop” Spotify playlist that we all “ironically” danced to at various house parties last weekend). So it was not without some surprise that I found myself weeping through much of Show ‘Em What You’re Made Of, and then laughing hysterically, and then hiding my face in shame, lest anyone witness this unexpected whirlwind of emotions.

It was kind of like watching a series of home videos featuring estranged family members you used to know very well, punctuated by the odd rhetorical question—“What do you do when you’re a grown man in a boy band?”—and ridiculous metaphor—“We were like gods, in a weird way.” The film follows the story of the five songbirds from their first audition, all the way to 2013, as they prepare for their 20th anniversary reunion tour.

Since the Backstreet Boys reached the height of their fame before anyone was able to Google anything, or read Perez Hilton, this documentary is pretty gratifying in terms of confirming a lot of my BSB-based suspicions, especially since it was directed by Stephen Kijack—known for his “realistic” portrayal of Metallica.

Here is a list of those suspicions now confirmed:

1. AJ totally had a cocaine habit. At one point, one of the band members recalls that “AJ didn’t know he was in a boy band,” and thought he was rock and roll. Later AJ admits to missing a Black and Blue-era show due to being in a “coke coma”. I mean, obviously, looking back at AJ’s “cowboy” phase and painted nails, this dude was a cocaine-fuelled mess, but how was I to know?

2. Howie WAS pissed off at being pushed to the back all the time. The story goes that, in the beginning, Nick and Howie were the lead singers of the band. Then they got a European manager who invented the badass “Backstreet’s Back” sound, which was apparently not a Howie Dorough sound. 20 years later, Howie finally has the balls to complain about it and says he’s not making a new album unless he gets to sing the lead on every song. He also owns a replica of Ryan Gosling’s “Drive” jacket. Unconfirmed suspicion: Howie is a serial killer.

3. Brian is a weenie. I wrote this in my notebook four times throughout the viewing. In the film, he’s constantly crying because, after singing everyday for 20 years, he has vocal tension dysphonia, and he can’t sing like he used to. Also he wears an apron when he cooks, and worries that female fans might kill him.

4. Kevin is the Dad. We always knew he was the oldest of the group, but in the film he’s just like constantly telling everyone to get their shit together and be as grown up as him (and he has grey hair in his beard). It’s super hot. All of the boys, including Kevin, have their own individual daddy issues, plus they have the collective daddy issue of their first manager, Lou Pearlman, stealing all their money and going to jail. So THAT’S why all of us teenage girls fell hysterically in love with them. I couldn’t put my finger on it until now.

5. Nick Carter IS a maniac. I don’t think any of us realized how young he really was when the band got famous. He was 19 when Millennium came out, which is insanely young to gross $30 million in a year. So, now he’s just fated to be messed up forever. In the film, he yells at Brian for having a completely logical vocal defect, and compares said defect to his own former cocaine habit. Like, Brian get over it, basically.

6. Florida is a terrible place to grow up. The film follows each band member back to their respective hometowns, most of which are in Florida (except Kevin, who grew up in the Kentucky woods and knows how to chop down trees). It’s like this wasteland where, if you don’t become a 14-year-old pop star, your only other option is to become a 14-year-old drug dealer. Either way, say goodbye to your innocence.

7. N’SYNC WAS an act of betrayal. JT and his gang were formed by the very same Lou Pearlman who created BSB. He created them unbeknownst to BSB as a clever back-up plan in case his first plan, the Backstreet Boys, failed. I always knew there was a reason N’SYNC SUCKED SO BAD. Unconfirmed suspicion: Jive Records was actually a CIA mind-control experiment designed to make us all forget Kurt Cobain.