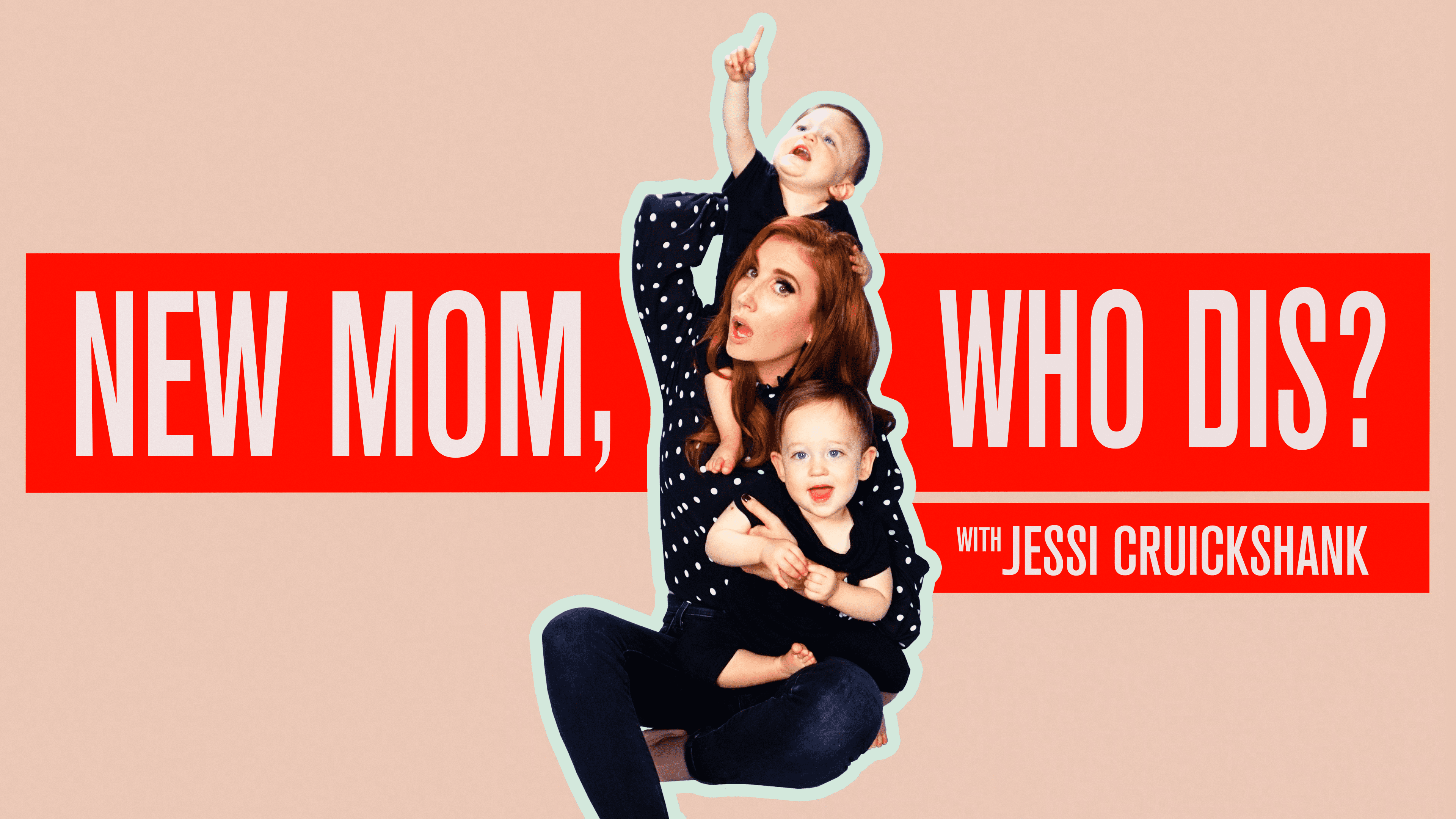 New Mom Who Dis? We Chat With Jessi Cruickshank About Fake Instagram Motherhood, Hot Dad Roundtables, and Having a Postpartum Identity Crisis

I first met Jessi Cruickshank over a decade ago, when we were both a lot younger and in very different life phases. I had just launched Shedoesthecity.com and was at the peak of my hard-partying days, guzzling as much wine as I possibly could, and Jessi was gaining huge popularity as the co-host of The Hills After Show on MTV with Dan Levy. (Perhaps the last time our generation regularly watched cable TV?)

Jessi has never shied away from telling it like it is, nor does she hide behind an on-screen persona. Her realness, along with her hilarious self-deprecating humour and confidence to ask anybody anything, is one of the reasons why she has amassed such a loyal following, but I think I speak for many when I say that it is when Jessi became a mom that I truly became a mega fan. I’m such a fan, in fact, that just minutes before the press release about her new show, New Mom: Who Dis?, dropped into my inbox, I was creeping her Instagram (a near-daily ritual), watching her family stroll through the Vegan Street Fair in North Hollywood.

While most would assume that capturing the comedy of motherhood came naturally to Jessi, it was a process that unfolded amidst a postpartum identity crisis. “My priority was work, and in terms of my identity for work, it was edgy and funny,” says Jessi. “Then I had babies and wondered if I would still be funny, if anyone would hire me. I had all these questions about who I was and what my voice was, and then I realized there is literally nothing funnier than having two babies at once. Being a parent in general is hilarious.” She jests about the identity crisis, because it’s not the same as postpartum depression, but it is a very real feeling that begs the question, Who the hell am I now?

In our conversation, I shared with Jessi that I had a similar experience shortly after my son was born, when I realized that it would be years before I could really “do the city” again. Since Shedoesthecity.com, at the time, was synonymous with youth and freedom, and the ability to hop from east end to west end on a whim to catch the latest opening,- I began to feel alienated from the very publication I created. And since so much of my identity was tied to the site, I found it all very confusing. But, like Jessi, by pushing through it, I was able to see clearly again and eventually realize OH YEAH, MY AUDIENCE ALSO GREW UP!

It’s weird how we can feel so alone when so many women are obviously going through the same thing, but defining motherhood on our own terms is challenging, especially with numerous outside forces telling us how we “should” be. “There is so much garbage IG perfection out there: Moms with hats and sweaters running through a field with their baby in a matching hat and sweater. That is not real life! These women, with millions of followers, think that’s how their life should be, and it’s not,” says Jessi, as my mind drifts to all the perfectly tilted straw fedoras I’ve seen on moms waltzing across sandy beaches. “Those things I always thought I’d be as a mom, I’ve let go of. My kids are going to eat non-organic blueberries now and again, and it’s going to be okay.”

While we as a society are getting better at truth sharing, and women are feeling more comfortable about revealing their own stories, from postpartum anxiety to how much our bodies are impacted by childbirth, there is still a lot of genuine fear when it comes to combining our work life with our mom life. “I think for women, especially women who are writers or do anything in this crazy business, there’s a fear it will make them seem unavailable or old, or somehow not as sharp or funny. I think when I finally realized that I could make mistakes and say stupid things in interviews, or make a fool of myself on a ‘date’ with Bradley Cooper, that’s what people liked. I realized I didn’t have to be perfect and polished. After becoming a mom, I learned that lesson again: Oh, I don’t have to pretend to be cool, like I’m going out on Saturday night. I can share with the world that I have babies and that I don’t know what I’m doing and it’s a mess. It’s a straight-up coping mechanism. If you can’t laugh at it, you’re screwed.” 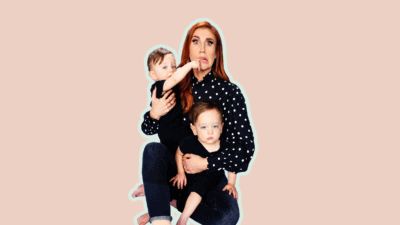 In New Mom: Who Dis? Jessi will continue to do what she loves and what she’s loved for: interviewing a range of people she finds interesting, like Courtney Ann of @texasthighs. “I read a story about her when we were making the show, and I was like, ‘THIS is someone I need to talk to!’ She’s a lovely mother of two from Texas, and she posts pictures of her butt that her husband takes.”

And it’s not just moms with big bums that Jessi’s into. “We did a hot dad roundtable, with really hot dads. That’s what does it for me today. But also to have a more in-depth conversation about what it means to be a dad. I’m also talking to kids, old ladies, and my favourite cross-section of people about a variety of funny topics.”

Between bi-coastal living, launching a new show, and caring for two eighteen-month-old toddlers, I wonder if Jessi ever makes time for herself—time away from the camera, away from her kiddos, to just breathe. I ask her if she’s figured out how to put her oxygen mask on first? “I still haven’t gotten there yet. People ask, ‘Tell us about your self-care routine!’ I’m like, ‘I’ll talk to you about it when I’ve figured it out.’ I find it really difficult because I’m still dealing with the mom guilt side of things. My husband got me a massage once, but the entire massage I felt bad for being there. I kept wondering what they were doing. I haven’t mentally gotten past that point where I can just enjoy time to myself. I will say when I travel for work sometimes, and I lie in bed watching Judge Judy and order Uber, those are great moments.” Solitude in a hotel room is a fantasy shared by many of us.

On the first episode of New Mom, Who Dis?, Jessi sits on the floor, answering questions submitted by her followers, while Rio and Diego climb on her, pinch her nose, and pull her hair. “I brought the babies to the shooting of the first episode, because I wanted to spend more time with them. But it’s impossible to sit there with two babies and do a perfectly poised Q&A. There are bits of utter chaos, and we don’t cut them out, we don’t pretend they didn’t happen.” It’s cute, funny, and her no-bull, vulnerable responses offer solid advice.

While Jessi is exhausted by the idealized (fake) motherhood so often portrayed online, her show doesn’t have an M.O. to debunk it: “Writing for FLARE really challenged me to open up and be honest about certain experiences in pregnancy and motherhood. This is kind of like the video version of that. I didn’t go into it with the goal to make something REAL, because then it would probably feel completely inauthentic. I went in with the goal to create something good.” That it is.

New Mom: Who Dis? will air globally each week on Facebook Watch as part of Kin Network . For all of us that follow Jessi on the regular, it’s a surefire hit. 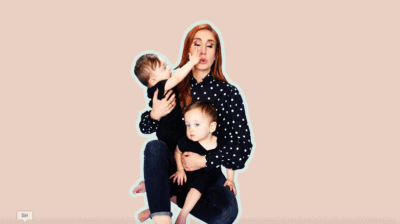