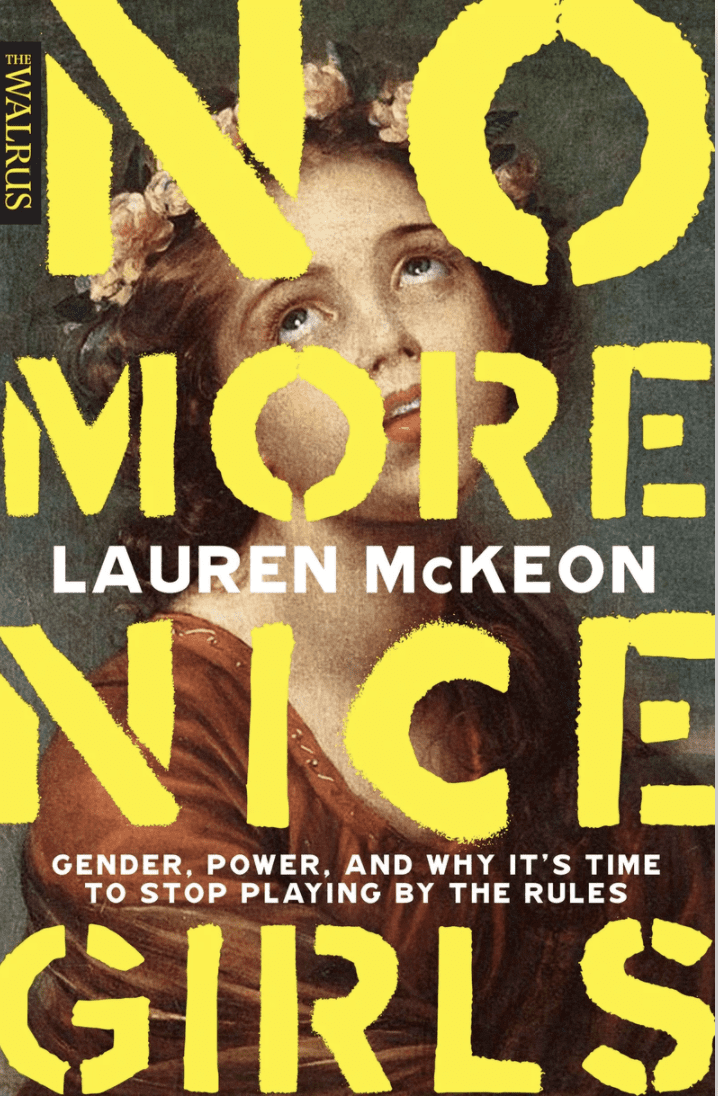 Women are socialized to be nice. We’re taught to work hard, never complain, and put the needs of others’ before our own. But who does this serve? Not us, my friends!

So what’s the solution to all this demureness? Lauren McKeon is currently the deputy editor of Reader’s Digest in Canada. She’s an award-winning feminist journalist, whose latest book, No More Nice Girls: Gender, Power, and Why It’s Time to Stop Playing By the Rules, is all about women and power. It’s a feminist call to arms that encourages us to stop playing by patriarchy’s rules.

We sat down with Lauren for a conversation about how women can stop being nice, and start living more empowered lives.

She Does The City: What  does the trope of the “nice girl” look like in 2020? Why is it so important for women to resist being “nice”?

Lauren McKeon: It’s important to draw a distinction between the idea of being nice and what it means to be kind. To me, niceness is a trap. It’s used to dismiss women (oh, what a nice girl; she’s just too nice) and it’s used to attack them (she’s such a bitch; if only she were nicer). It signals a way to contain us, the impossible double standards we face, and the criteria by which we can never win. I don’t know that it’s a trope in 2020, so much as a proverbial box that we’re still trying to stuff women in. Kindness on the other hand is a practice; it’s work. It’s what happens when you act to ensure people have dignity, equity, a voice.

SDTC: What inspired you to write a book about women’s relationship to power?

LM: This is an answer I’ve given elsewhere, but it’s still true. My first book, F-Bomb, ended on a scene from the Women’s March on Washington—this incredible moment of resurgent feminism. People were hopeful. People were angry. And I started to think about what came next. What would we do with these powerful feelings? What kind of world would we want to create? And what would it look like if we reimagined our systems of power? I wanted to talk to the many, many people who were already doing just that. People have been doing this work for a long time, and I think recent years have only fuelled that and made way for even more creativity, more challenging of the status quo.

SDTC: What are some of the key ways women and non-binary folks are challenging the powers that be?

LM: People are doing this in so many ways, big and small. I interviewed women who founded a new greeting card company to centre women of colour, and to also centre life events that are outside of the typical narrative. I spoke to a trans filmmaker who pushed past the limiting “coming out” and trauma narratives that the heteronormative mainstream often demands LGBTQ+ stories focus on. Taking control of your own stories and increasing representation definitely challenges the powers that be. There are women that are creating trauma-informed businesses. Collectives that are redefining what it means to have a healthy economy. Women who are reimagining technology, and the culture that surrounds it.

SDTC: What are some of the new feminist structures that could replace patriarchal power?

LM: It’s happening all around us. In the past year, we’ve seen women change our ideas of what effective leadership looks like—that is, people like Dr. Bonnie Henry and New Zealand Prime Minister Jacinda Ardern have been widely praised for leadership that is compassionate, vulnerable, transparent, and open to admitting mistakes. It is kind. On top of that, we’ve seen Black Lives Matter surge back into the spotlight, rightfully demanding a total overthrow of systemic power and the defunding of police. Indigenous activists are dismantling colonialism. Many movements together are challenging white supremacy. I think we need to remember that the patriarchy encompasses all of these, and they all need to fall together.

SDTC: As a feminist writer, what are the greatest obstacles you encounter when trying to disseminate your ideas?

LM: Earlier in my career, and before we saw a refocus on women’s rights, I had a harder time. Feminist writing was often seen as inaccessible, as fringe, and as something that isn’t mainstream enough. It isn’t lucrative. While those challenges still exist, I think that’s changing. #MeToo, and other movements, have shown us that people do want to discuss these issues, they want to learn about them, and they want to help build something better. (Well, also, admittedly, I do also hear a lot from people that want to destroy everything we’ve built).

But, at the same time, I have a lot of privilege. As hard as it is for me to be heard, it’s so, so much harder for other women: women of colour, Indigenous women, trans women, disabled women, immigrant women, and on it goes. They’re the voices we need to hear most; any of us who have a platform need to hold the door open for them, and we need to elevate them.

SDTC: What’s something our readers can do today to challenge traditional power structures?

LM: It doesn’t have to be something big. It can be making changes in your everyday life. Maybe you create something, tell your story, change your consumption habits, live as authentically as you can. And, yes, it can be activism. It can be speaking out. It can be supporting others. It can be reading a book. There are so many things that need to be challenged. We can’t all fight every battle. We have to work together to create change. I think it’s about finding what connects with you most, and doing the work.

Lauren McKeon joined authors Michelle Parise (Alone: A Love Story) and Hana Shafi (Small, Broke, and Kind of Dirty: Affirmations for the Real World) a the Toronto International Festival of Authors this past weekend. The Festival runs until November 1st. Check out all the event programming here.