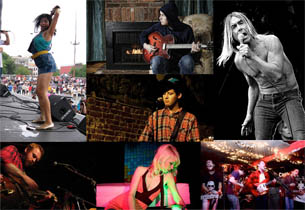 by Kait Fowlie
650 bands in 7 days might seem totally overwhelming, but we’ve put together a list of our top 10 picks for you to check out during the whirlwind week of NXNE. Here the bands we are super jazzed for:

1. IGGY AND THE STOOGES Yonge and Dundas Square, Sat June 19th 9:30 pm.
The iconic Iggy Pop single handedly created punk rock back in the 70’s, according to some. 30 some odd years later, he’s still in business and coming to Yonge and Dundas square to show Toronto what he’s made of. One of the most dynamic performers ever, he has been known to loose his drawers, smear himself with peanut butter, and rock makeup to rival Lady Gaga – not to mention belt some legendary punk rock hymns.

2. GLASS CANDY Wrongbar, Thursday June 17th 1:00 am.
This experimental duo has been likened to a frightened Debbie Harry or a pissed-off Lene Lovich in a haunted disco. The venue and late night slot is most fitting for the electro clash – tastic atmosphere their music creates.

3. ATTACK IN BLACK The Horseshoe Tavern, Sat June 19th 12 am.
This Canadian indie rock band started out playing punk shows in the small town of Welland. Their 2007 album Marriage was promoted with a sold-out launch party at The Horseshoe. Now they’re back to the same venue after 3 years of continual rock music triumph.

4. DE LA SOUL Yonge and Dundas Square, Sat, June 20th 9:30 pm.
If you are a hip hop fan by any stretch of the imagination, go see De La Soul and prepare to have your world rocked. The trio has been concocting funky jazz -rap since ’87 in long island New York, and just seem to keep getting better and better.

5. TIMBRE TIMBRE Gladstone Hotel Ballroom, Fri, June 18th 10 pm.
Cinematic, spooky, dusty, swampy. These are some of the adjectives used to describe this Canadian folk rock band whose 2009 album Out of this Spark was named album of the year by EyeWeekly. Frontman Taylor Kirk has a haunting, bluesy like voice like no other.

6. SURFER BLOOD Yonge and Dundas square, Sat, June 19th 12 am 6 pm, same day at Wrongbar, at 12 am.
This band’s 2009 debut album drew a lot of attention for its great guitar and generally catchy tunes. They have been compared to Weezer, Pavement, and Built to Spill. They make feel good music reminiscent of the stuff I listened to in high school, but a little more highly evolved.

8. HEALTH Sneaky Dees, Thurs, June 17th at 12 am.
HEALTH incorporates electronic textures and noise rock volume in a way that would totally rock a venue like Sneaks. They’ve opened for Nine Inch Nails and collaborated with Crystal Castles. This band has kind of an unpredictable, kaleidoscopic style and their music is most conducive to drinking like a nihilist and jumping around with general disregard for your surroundings.

9. JAPANDROIDS Lees Palace, Fri, June 18th 12 am.
This garage rock 2 piece from BC have been making really endearing, fun pop music since they were formed in 2006. Since, they’ve stormed the media with their post teenage angst antics. We anticipate a dance party of screaming proportions.

10. WAVVES Lee’s Palace Fri June 18th 11 pm, Yonge and Dundas, Sat, June, 19th 7 pm.
This one man band is highly under rated. Singer Nathan Williams is notorious for his interesting live performances – perhaps due to the fact that he’s a 22 year old self made celebrity with a pretty voice, a pretty face and an avid appetite for the party. For a perfect introduction to the prince of digital garage rock, youtube No Hope Kids – if you’re not instantly filled with nostalgia for your lethargic high school years, then I am utterly alone in this world.