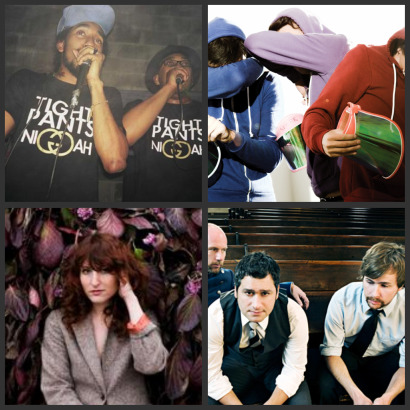 Remember in that proto-computer-animated show ReBoot (circa 1996) when THE GAME CUBE would descend from the sky, throwing the unsuspecting nanobeings into another dimension? That, kids, is NXNE is in a nutshell.

My weekend of epic (and apparently retro-digital?) proportions started off at Lee’s Palace for night two of the Six Shooter showcase. My buddy Sara and I finished work around 10:30 pm and shoved some McFlurrys and fries down our throats as we cabbed from Yonge and King to Bathurst and Bloor in an effort not to miss the 11 pm act. And what an act it was. Slinging bottles of 50 in all four of our collectively sweaty hands, we barely had room for our jaws to drop to the floor as Luke Doucet , Justin Rutledge and NQ Arbuckle jammed out with bluegrass sass. There was a lot of flannel. And awful cellphone photography. Between acts, the focus naturally turned to intensifying our dirty dirty beer-induced haze, pushing our way to the bar through the throngs of would-be-band-aids and a forest of facial hair. With Skydiggers came more six-strings and facial hair than I ever thought could be crammed into one enclosed space.

But then. But THEN! 1 am rolled around and it was Special Guest time. And Special Guest time for Six Shooter means Elliott Brood . Swoooon. I am both proud and ashamed to admit that I was indeed a consenting participant in the estro-fest gathered at the band’s feet in a drunkenly swaying mosh pit that attempted to catch any one of Sasso , Pitkin , or Laforet’s six eyes. Siiigh. Lights went up. Got a free poster. On to the next.

The next happened to be the Horseshoe , in time to catch Opopo . But let’s be honest, folks, Sara and I were in no condition to do any catching at that point in the eve. As is pretty standard on any given NXNE night, though, we saw essentially everyone from our past, present, and future in the foggy ramble through the streets of T.O. In fact, I was way thrilled—maybe way too thrilled–to find that the guitarist of Opopo, Bryan Sutherland , and I went to summer camp together! Wahoo! When Opopo’s electropunking was done creating the conditions necessary for a torn-up dancefloor, so was I. Sleeptime.

Friday night held even more of a raucous musical scavenger hunt then Thursday. Rivoli at 12 for Hannah Georgas —soothing like woah. Holy Joes at 1 for Alphabot! who were—sadly–better in the studio than they are live. Then I was somewhere else. I think that’s where I lost my sense of time. All I know is that at 3, I was mowing down on Sneaky Dee’s nachos, had broken my purse and my recently-purchased sassy gladiator kicks. Effff. Crashed on a friend’s futon, party dress intact, eye-makeup down to my chin. Work at 10 am the next day? Yesplease. (nothanks).

You win, NXNE. Every year I try to champion your 4 am-last-call, sweaty dance floor, killer music cocktail of insanity, and every year I lose. You always manage to blow my mind and shatter the constitution of even this most dedicated insomniac. And so, like years past, I find myself sitting on a curb on College St. amongst the remnants of Taste of Little Italy with the sun rising and my boss’s dog yapping at my tired feet, trying to remember exactly when and why I invited half of Sneaky Dee’s back to my apartment to freestyle over the new Mos Def album. But I’m getting ahead of myself.

My downward spiral started at Whippersnapper, with Steamwhistle in hand and free salsa.
Brian Borcherdt (of Holy Fuck fame) was playing a gentle acoustic set in the small gallery. He took the stage and began to play with no introduction, and a hush fell over the assembled crowd as one by one, they realized the show had started. He finished the first song and another to an awed silence so blissful, the beats from Strangelove could be heard beneath our feet. He smiled and thanked the crowd for giving him an opportunity to play his slower stuff. “Usually I have to start right in with the rock and roll,” he joked.

Reveling in the spirit of addictive contradiction that is inherent to NXNE, next stop was Sneaky’s for Ninjasonik . You know that feeling when a show is so good, you forget entirely that there are other parties happening anywhere in the universe? Your drunk, sweaty self is thinking ‘there is so much energy in this room there’s none left for anywhere else!’ The Ninjasonik show was one of those. A giant sweaty dance party where people kept popping in and out like that Adidas ad with all the famous guys and ladies.

So it’s not my fault that I found myself curbside at 6 am. Blame bands from Brooklyn. Blame 4 am last call and a contraband plastic bag full of cheap american beer. Blame the free tequila shots from the bartender. But most of all, blame North by Northeast. Best weekend ever.