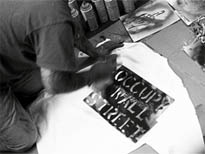 Film buffs and activists have been wondering, will there be a definitive film of the Occupy Wall Street Movement?

Jem Cohen’s Occupy Wall Street Newsreels might be it. His five documentary newsreel is the first film on Occupy Wall Street to be shown publicly, covering the moments when OWS took off. From a Tumblr blog called “We are the 99%” started by an anonymous activist, all the way to the police raids in Zuccotti Park, the newsreels show the shocking transformation of New York throughout the movement.

The reels allow a look at some of the hoards of protesters as they hold up massive signs and snap pictures with their phones as they march, but aside from the overly publicized images of the protests, Cohen’s portrait goes deeper. He shows an overturned New York at the crack of dawn and dead of night, peppered with flimsy tents and people sleeping on the grass in all weather conditions. It’s pretty heartbreaking to see crowds huddling together with coffees, comforting each other in solidarity. Cold, wet dogs and miserable travellers occupy a gloomy landscape.

As sure as good art will challenge viewers, there are also some happy moments in the protests – a trumpet jam session in Liberty square in the middle of the night, protesters silkscreening shirts for other protesters, and one man performing an impressive, harmonica accompanied yodeling ballad. Of all the images, the signage really steals the show: “I got 99 problems but the rich got none”, “I woke in a sweat from the American dream”, “make less than 1,137,684 per year? You’re the 99%”, and 2 days after protesters got evicted from their camp, “you cannot evict an idea.”

Cohen juxtaposes the newsreels with a few Youtube clips and a soundtrack of various ambient artists. He also includes the infamous voice over of Kansas bank chairman Herman Caine: “Don’t blame Wall Street, don’t blame the banks, if you don’t have a job and you’re not rich, blame yourself.”

The director knew that OWS would open floodgates of opportunities for documentaries, and at the time there were already advocacy films in support of it as well as Youtube blasts against it, but, as he told Reelpolitik, he wanted to offer kind of reporting “based on direct observation that expresses solidarity without propaganda, while leaving room for experimentation and lyricism.”