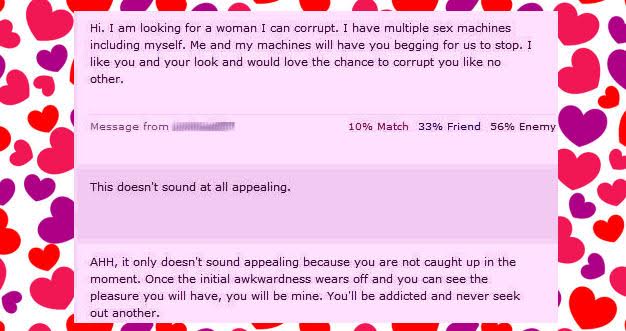 As anyone who has dated online will concede: the internet can be a vile place.

Stephanie Avery had her fill of idiotic exchanges, so she decided to mine them for comedy’s sake. The result is the very popular event OkStupid 2016: Live Readings of the Best Worst Online Dating Conversations, which will run for three nights this February. She Does the City chatted with Avery about the nature of the internet dating beast.

SDTC: What made you want to start OkStupid?

SA: OkStupid all started as a video installation. I had amassed a large number of ridiculous conversations, mostly from OkCupid, and I was trying to figure out a way of processing them with a sense of humour and without losing all hope in online dating/humanity.

I invited about twenty of my male friends over and we recorded ourselves performing some of the conversations verbatim, as though they were conversations we were having on an actual IRL date. The idea was to show how inappropriate the conversations would be if they were held face to face, but – for reasons that still elude me – a ton of people (mostly men) feel comfortable initiating when they have internet anonymity to protect them.

The video installation was a big success. Not just because it took a negative situation and defused it with humour in a way that everyone enjoyed, but because pretty much every woman who watched it related to the conversations. The more women I spoke with about online dating, the more I realized how ubiquitous my terrible/hilarious experiences were. It seemed like the next logical step of the OkStupid project was to provide an opportunity for others to share their similar experiences. So I did!

What was your most memorable online dating interaction?

You’d think this would be a difficult question to answer considering all the creepy messages blend into each other after a while, but there’s one in particular that stands out (see above photo).

​This turned into a very lengthy conversation, which somehow transitioned from him professing his undying love to me, to becoming the father of my children, to providing me with all I could ever desire, to bringing me to an all-bacon restaurant (“You love bacon and I love bacon. Let’s make that the driving force for our relationship.”), to waiting for me in heaven when he dies before me (“And when you pass, be it known, that I will be waiting for you on the other side with my arms open waiting to hold you again.”), and so much more but you get the idea.

What common themes have come up?

The bad conversations come in all forms but they all seems to boil down to a sense of entitlement. In the cases of these terrible exchanges, it’s as though us ladies are only there to gratify desires with zero regard to our own wants or needs. Traditionally these conversations materialize in a handful of familiar ways:

1. Shock value
I have no idea if the people who initiate conversations in ways that seem to only be for shock actually expect a positive response/any response, but either way, they are boggling. “I would plow right through you,” “Want my DNA in your mouth?” “You’ll do,” and straight up dick pics/videos are a few of my personal favorites. I like these because there is no reason to answer cordially and amazing conversations sometimes ensue. I’ve even managed to get a couple of apologies!

2. Passive aggressive/pathetic
There seems to be a notion that we are responsible for a stranger’s sexual and/or relationship satisfaction, even though the message initiator is unwilling to put any effort into it (“I’m sitting at home alone.”)

3. Condescending
This is the only example where there’s a possibility the sender read our profiles. Sometimes they don’t like what they read. Instead of looking for someone more compatible, they explain why our opinions are wrong and why we should change them to satisfy the whims of strangers (“Even though your profile says you don’t want children, I ask how do you intend to leave something of yourself behind when you pass?”). Other times they expect us to be grateful for being #notallmen (“don’t shave? ive always had a massive attraction to women who look like they just came out of the amazon rainforest lol”). To a lesser extent I’ll also include infantilizing pet names. One time I was even asked to smile. In an OkCupid message!

4. The silent treatment freak out
The freak out typically happens when someone’s ego is so frail that a simple lack of response induces ALL THE RAGE! Whether we didn’t respond because we didn’t want to or because we never got around to it is irrelevant. This ranges from moderate (“disrespect nice angle”) to out for blood (“Did you know that you are very ugly and I am just texting you to fuck you .. I just wanted you to know that..because there is no way I can date someone like you.. Just to be honest.”). These guys are great because they create a lose/lose/lose situation. Either we politely decline them and we’re whore bitches from hell or we ignore them and we’re whore bitches from hell or we accommodate their juvenile insecurities. Being a whore bitch from hell has never been more appealing!

5. They’re openly bad people
This one is reserved for the more ambitious recipients of (usually) innocuous messages from people with whom we have very low match ratings (depending on the site/app we’re using). The messages are usually along the lines of “hi” or a quick introduction that has probably been pasted indiscriminately into a ton of messages. These come from people who have clearly paid no attention to our profiles and are shocked/offended when we point out the god-awful bullshit they openly state in their own.

If you’re not familiar with OkCupid, there’s a questions section that the site uses to calibrate match likelihood. The questions range from silly to fundamental and are the most efficient way of finding out if a person is unabashedly awful. I don’t tolerate racism/homophobia/misogyny in real real life and I sure as hell don’t tolerate it when I get to take advantage of the protection of internet anonymity (it goes both ways).

If I see that someone has answered “Do you think homosexuality is a sin?” with “Yes,” or “Would you consider dating someone who has vocalized a strong negative bias toward a certain race of people?” with “Depends which race,” or “Do you think a woman who has slept with over 40 men is a bad person?” with “Yes” (always from guys who are trolling for casual sex!), I will cut right to the chase.

When I call someone out for coming across as racist/homophobic/misogynistic, they are ALWAYS offended, despite being completely open about their views in their profiles. Like, how dare *I* judge them for something they wrote on a site designed for people to judge each other. The arrogance and entitlement of this attitude drives me particularly crazy.

I think I’ve covered a lot of the worst scenarios. There’s a lot of competition! But maybe the worst, if not the laziest, was just the word ‘sex’.

What is the best pickup line you have seen online?

​I wish I took screen caps of the good ones! Despite how it seems, I receive plenty of good messages, I swear! I get way more good or bland messages than outright bad ones. I remember once hearing a statistic along the lines of “People need ten good experiences to make up for one bad one.” This rings very true for online dating. But I digress. I’ve received some classy and respectable lines that were able to proposition me without coming across as entitled. Like, “I’m in town for the weekend and you seem really cool. Maybe we can meet up and, if we hit it off, see where it goes from there?”

I’m not looking for someone to be incredibly clever or sweep me off my feet in the very first message. I like a simple, “What are you up to tonight? How about a drink?” from someone with whom I might actually get along (AKA they probably read my profile, saw we had stuff in common, and aren’t randomly messaging women online).

What are some conversational red flags to be aware of?

Using ‘lol’ as punctuation. You’d be surprised how often I see this. Using a single letter or number to replace a word. It doesn’t bode well if someone can’t take the time to spell out ‘you’ or ‘to’. I get that some people are sending messages from their phone but it takes like three extra seconds to not have your first impression come across as a barely literate tween. And lazy messages. As Audra Williams says, “… a ton of mediocre dudes are going to send you the word “hi” and expect you to somehow manifest enjoyable chit-chat out of that.” Who has the time or desire for that?

Why do you think this event resonates with people so much?

OkStupid takes a negative experience shared by many and turns it into something positive and hilarious. All these terrible messages/conversations (unconscious or deliberate) can offend, belittle or deprive us of our agency. I think humour is one of the most empowering reactions to these feelings. This comparison is so random but it reminds me of the end of Labyrinth when Jennifer Connelly is all like, “You have no power over me,” and David Bowie withers away – but with more laughter and solidarity. It’s cathartic.

Best advice you can give to people traversing the muddy waters of online dating?

Have patience and humour. Take advantage of message filters. And remember you’re also protected by online anonymity and you don’t need to take any shit!

Stephanie Avery is a Toronto-based artist, art director and adventurer.