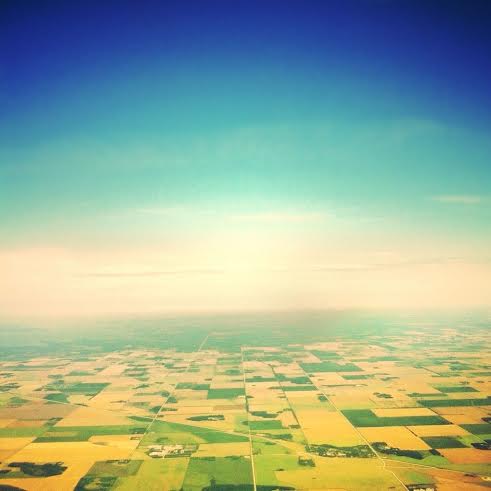 "I fully believe part of that landscape is imbedded in my stride and the way I approach people, life, and emotion. So what happens when a person dramatically changes their environment?"

On City vs Country, Home vs Away, and What It Means to be a Prairie Girl

Do we make the city… or does the city make us?  -Radiolab

I recently made a big, public proclamation for my love of Toronto and its hustle here.  The two of us have been courting for a while now, and moved past the point of exchanging class pins and front-stoop smooches. But I have a confession. I am from Regina, and I loooove my Regina (okay, real mature guys) and part of this heart will always remain unconditionally devoted to those prairie skies. I just returned from a trip to the land of milk and honey, pilsners and perogies, and it got me thinking about cities—the ones we live in, and the ones we begin in. What do we take with us and what do we leave behind?

I’ve been told that I physically look like Saskatchewan, that my eyes, hair and skin reflect the lay of the land. A Sasky is easy to spot across a crowded bar—and not just because you know their second cousin once removed, or that dude that used to cut hair in Weyburn. There’s a downright essence, and I’ll proudly go on record for saying I APPRECIATE A PRAIRIE PERSON. There’s no starting over, bullshit, or pretense. No one-upping or posturing. They’ll give you the shirt off their back and always, always be ready with a cold beer, a firm hug, and a kickass beginning to a dance party. So not to get all chicken-before-the-horse-cart here (right?), but which comes first… the personality or the city that helped create it? We’re all familiar with nature vs. nurture, but lately I’ve been considering an internal (physical) response to an external environment and circumstance… and wondering how it all factors into the way we develop, internalize emotion, and communicate with the world.

“People are most likely a product of where they were born and raised.  How you think and feel’s always linked to the lay of the land, the temperature.  The prevailing winds, even.  Where were you born?” — Haruki Murakami, Kafka on the Shore

I’m a big Murakami fan, and for me this quote conjures such strong images of home: a sprawling powerful sky and the spot where it kisses the horizon. Gaudy crystalline snow on an untouched street. The wind that throws dirt in your teeth, cuts your face, and makes you swear like a sailor. Hot as hot and cold as bloody cold… I fully believe part of that landscape is imbedded in my stride and the way I approach people, life, and emotion. So what happens when a person dramatically changes their environment?

I moved to Toronto three and a half years ago, and for nearly that exact amount of time have been dealing with some pretty crazy physical & hormonal symptoms. There are a lot of contributing factors here, but I think it would be purposefully ignorant not to consider that at least some of these things are linked to stressors indigenous to the city. It’s a place of dreamers, but also one of transition—everyone chasing something down or moving on to the next best thing. You know, hustling. And the stress of that is tangible. When I look up from my iPhone it’s to a sea of heads and shoulders hunched over, hurrying to transits and deadlines. Our Mayor is…. juuuuuuust kidding guys! I know we’re sick of talking about that Tweedle-dingus.

Toronto’s great. But it really is a living, breathing beast all its own… and only recently have I been able to truly take it for all its parts. I’ve found myself in a community and neighbourhood of people I care about, and discovered calm in its harbourfronts and nooks. Far away from Yonge Street there’s a perpetual vacation on the island, a neighbourhood barista, and a stranger chasing you with a dropped shoe. This joy of this city honeymoon phase lies in the diversity of its people and our connections with its strangers—who I’ve learned can be pretty swell if I’m open enough to let them in. Sometimes, if you’re really lucky, you get a long breakfast with a new friend’s parents and some blue jays, ending up feeling grateful for moments that remind who you are, amidst it all.

I used to hate the wind. In Saskatchewan nothing could frustrate me faster, but now it is Toronto’s hum and constant jostling that irks me in the very same way. Maybe it has less to do with the cities we’re in and more with the grounded piece of ourselves we carve out in them. But either way, when the cacophony of hustle and hum gets to be too much… you’ll find me down by the water. Because it’s the wind you’ll miss the most when it’s gone.