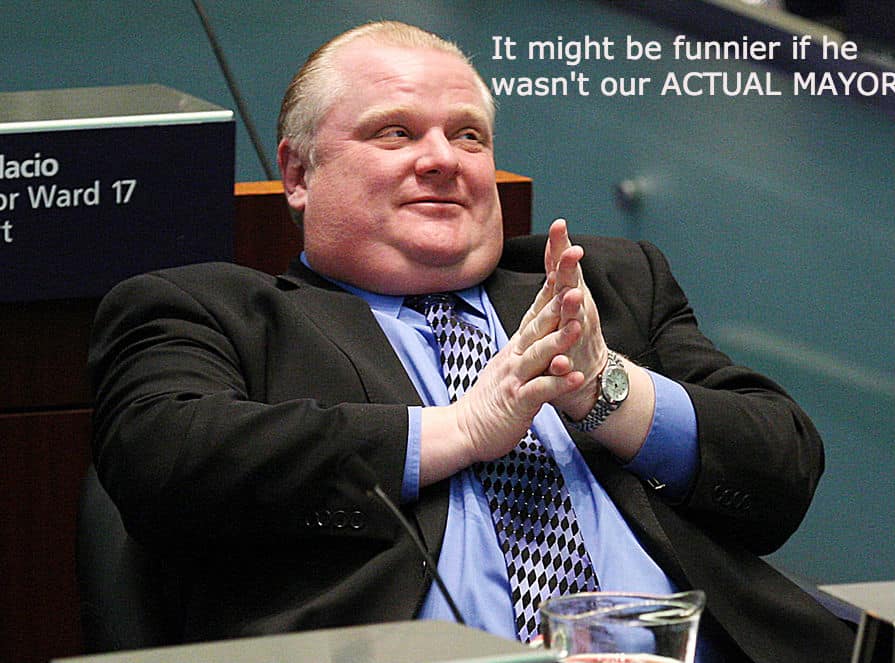 There is no question that your country’s entertainment industry has an enormous influence on ours. From TV, magazines, movies to music, we eat it all up. That being said, as a Torontonian who is extremely happy and proud of this city, for the love of god, PLEASE STOP ENABLING Rob Ford.

If you weren’t already aware, a big election is coming up. Our politicians are currently putting signs on lawns, dispersing flyers, magnets and stickers. They want to get their names out there. By inviting Rob Ford to attend the Oscars, appear on your talk shows and featuring him on a crack-smoking Mardi Gras FLOAT, you are doing just that. Even if you are making fun of him, 1) he’s not in on the joke, and 2) you are increasing his chances of re-election through not only name recognition, but helping him to seem “funny” and “cool”. This might be hilarious to you, but you are seriously affecting the future of Toronto. He doesn’t have to be your mayor, but unfortunately he has to be mine. I’ve heard Jimmy Kimmel and various Americans (and Canadians) say, “Well, he seems to be a pretty good mayor”. Rob Ford also seems to think so too. To help you better understand what you are really doing to our city, here is a list of truths the Ford brothers want us to ignore amidst stories about Hollywood visits and PR gaffes:

HE IS NOT SAVING US MONEY
He likes us to believe that he looks out for the taxpayers’ dollars and has saved us an insurmountable sum of money. More specifically, he likes saying “$1 Billion dollars”. He is wrong. It’s been proven over, and over again. His numbers don’t add up. He’s been using the past years’ surplus from previous administrations to balance his budget out, and though he may have saved $60 on our vehicle registration tax, and some money here and there, he is actually running our city into more debt. These are just a few examples of his lies and incompetence in terms of budget.

In reality Ford carelessly wasted $65 million of the taxpayer’s dollars by cancelling an existing fully funded and approved transit plan that’s been years in the making. It was also essentially illegal. He moved an entirely new bike lane on Jarvis Street, to one street over (that’s $86,000 to have it installed in 2010 and $200,000 – $300,000 to have removed in 2012). He has saved some money on office budget cuts but doesn’t mention large increased costs in other areas such as labour deals. Toronto’s long-term debt has also increased by $800 million after his first two years in office, following David Miller’s administration. Basically, Rob Ford is telling you that he is saving money, but really borrowing more money, which we will have to pay for in the long-run. BORROWING ISN’T THE SAME AS SAVING. He also championed an inefficient subway line this year, promising that he will find a way to fund it without raising taxes. Surprise, surprise, taxes had to be raised to pay for his subway line. Despite this FACT, he keeps saying that he hasn’t raised taxes? His level of delusion in general is astonishing.

HE DOESN’T ACTUALLY CARE ABOUT POOR PEOPLE
Rob Ford supporters are predominantly from lower income households. He claims that he “sides with poor people”. Yes, he visits Toronto Housing Community buildings, shows up with gifts and fixes their playground. That’s great, it’s important to make people in your community feel like they are listened to, even if he is a millionaire.

My issue is not that he cannot understand realities of a poor or even middle-class life, but rather, the fact that he has consistently voted against helping these people in any way. From social programs to housing, according to Councillor Vaughan, Ford has “done everything in his power to cut funding for public housing and undercut pleas to Ottawa for funding.” Showing up and handing out toys like Santa Claus does not fight poverty. It’s the big picture decisions that need to be made. He is lying to these people, like that kid at school who pretends he’s friends with you for your tasty sandwhich, but talks behind your back at recess. It’s downright dirty. In lower income families, members may not have the resources to access information and understand the reality of what Rob Ford is doing to their communities. This makes the name recognition factor, and him standing on the red carpet next to the likes of Brad Pitt, even more influential in the upcoming election.

HE REALLY, REALLY DOESN’T CARE ABOUT POOR PEOPLE, WOMEN, AT-RISK YOUTH OR CRIME
Simply put, in every society, it is proven that more poverty equals more crime. This is not to say that all criminals are poor, but a higher percentage of the population who lack the basic necessities of life means an increase in people taking desperate measures to provide for their loved ones, or to turn to crime because there are no other options. How do you combat this? By providing education to low-income households and starting with programs that will help youth, so they grow up making better choices. This means they will have more opportunities to climb out of poverty and contribute to the economy. More people who can afford to buy things means a better economy as a whole. By investing in this, you are also keeping kids off the street, out of jail (which saves taxpayers’ money), and subsequently, making your city safer.

Despite his own suggestion that he is the man for poor people, Ford has voted against EVERY motion and social program to help them. For reasons he unwilling to explain, he has voted against accepting money from the Canadian government (meaning, would not cost the city a cent), for a gangs prevention program. He has also voted against programs to make neighbourhoods safer, as well as programs and workshops for women new to the country. On top of this, Rob Ford has proposed cuts to libraries, community centres, daycares and nutrition programs for youth. Oh, and trees. Dude doesn’t even support trees. This is the kind of thing that will affect generations of Torontonian families, including mine. But sure, invite him to the Oscars for a laugh.

Besides generally voting against any grants or health initiatives relating to the LGBTQ community, our mayor has never attended the Pride Parade. He refuses to do so based on his own personal prejudices. He also threw a public temper tantrum about the 519 Church St. Community Centre’s request to raise a rainbow flag at City Hall during the Sochi Olympics to show support for our LGBTQ athletes. He kept kicking and screaming about how the Canadian flag should be put back up, but if only he had looked further, he would realize that the Canadian flag was still up there, with the rainbow flag on another flag pole. Thankfully, our deputy mayor, Norm Kelly is a sensible man. Regarding the Pride flag, he has stated, “We’re not afraid to stand up for the rights and privileges that are being abused in other parts of the world,” and “There’s nothing un-Canadian about that. In fact, that’s a very Canadian thing to do.”

HE IS A BULLY
Rob Ford likes to act like he is a warm, fuzzy, teddy bear-like man. However, if you’ve ever watched a council meeting in the last year, it’s a giant gong show. His ugly side is constantly revealed. Rob and Doug Ford heckle people, mock and threaten councillors, yell, scream, get kicked out and act like two insufferable frat boys.

Here are some examples:

My heart goes out to the councillors who try to be as diplomatic and mature as possible in the face of this behaviour. Prior to the stripping of his powers, they had been reduced to asking him exclusively “yes” or “no” questions in his capacity as mayor. He could not understand more complicated questions. It was extremely painful to watch, like a terrible reality show, except it’s real life and very real decisions are being made.

I’m not even going to get into how he is essentially a criminal currently being investigated by police, his substance abuse problem, his terrible character or his evident racism, homophobia and sexism. Oh, and the part in the police reports where city staffers claim they were sent to the LCBO on numerous occasions to purchase vodka for him, during office hours. People tend to overlook his personal shortcomings because they relate to the less-than-perfect man and are solely concerned with their imaginary saved tax dollars. He is running the city to the ground and compromising our quality of life. He is not just a cartoon character, but the chief magistrate of Toronto. He is supposed to lead and be a role model for our youth.

Sure, Rob Ford may want to keep taxes low, but at what cost? If he were to be re-elected and run the city his way, it would mean more crime, more poverty, more illness, more discrimination and undoubtedly higher taxes to offset his poor decisions. You can’t have a mayor that doesn’t understand the bigger picture of running a city, and reduces the role to returning phone calls and fixing potholes. To fellow Torontonians in the GTA: have more pride for your city and expect more. We can have a mayor that is considerate of our taxes and also considerate of the fact that Toronto is a thriving city. To our lovely neighbours in the US: we see where you’re coming from, but please stop making our embarrassing mayor more famous than he needs to be. You’re not the ones that have to deal with the repercussions of him being the incompetent leader of your city. We are.

Why the Oscars’ New Popular Film Category Is Problematic

Why I Voted For Olivia Chow