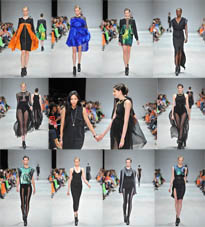 Only twenty-two and Toronto designer Amanda Lew Kee already has a signature style.

I have been watching Project Runway for years. It inspires me to become a fashion designer. My mother, who holds a BFA in textile design and was a tailor for decades, also inspires me. It hasn’t happened yet.

And then there is Amanda Lew Kee, a 22-year-old designer recently graduated from Ryerson University’s Fashion Program, who upstaged me before I could draft my first pattern. But what could I expect? I haven’t sewn a dress since last October, and I needed continuous tutoring to make it work.

For a sophomore, Lew Kee already seems to have developed a “signature”: edgy designs crafted with leather. Think of Japanese avant-garde designers with a splash of Alexander Wang’s sass. Her last collection for spring 2011 was lighter and sportier without a thread of black in sight, while her collection for fall 2011 was one of the most anticipated shows at LG fashion week. I’m sure the after-party was just as titillating: “My show is Friday at 830, then my after party at AME with Tommy Ton and The Misshapes,” Lew Kee tweeted as I melted a little.

The ominous, drum-heavy music bouncing throughout her collection with an uncontainable violin track was overwhelming. The sound of Für Elise was a clear sign that this collection would be sophisticated; an updated classiness, a masterpiece. Sheer fabric became the new leather play. I loved the black leggings with the sheer, vertical stripe going down the front legs. They killed me. I want a pair now.

This is the first time we experienced Lew Kee boldly go where no colour has gone. She used a shiny fabric that reminded me of turquoise-orange beetle shells. Vibrant glances of tinseltown were the most controversial aspect of the collection; the blue and orange puffs of tinsel were jarring, veering on cheap, but they were balanced out with tons of black and a fair use of translucent satin, zippers, and sequin panels. It was subtle yet structured, daytime yet night time, high fashion yet commercial. At the end of the show, I felt sombre and unfulfilled. I enjoyed the collection, yet I wished I could have played a bigger part in it somehow.

I know it’s self-defeating to compare yourself to a 22-year-old designer anomaly, but I can’t help it. Where were you at twenty-two? Were you working on custom wardrobe for HBO’s True Blood, dressing Shenae Grimes of 90210 or Keri Hilson? Were you featured in Teen Vogue, Nylon Magazine, Fashion TV, and the Globe and Mail?

Even though I no longer romanticize the designer I could have been, I still wonder. If Amanda Lew Kee can do it, then why can’t you? I’ll happily continue to watch Project Runway, attempt to sew my own wardrobe, and celebrate the crème de la crème of Canadian fashion design.