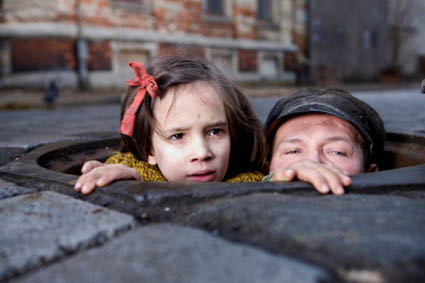 The daughter of two journalists, Agnieszka Holland’s grandparents were killed in the Warsaw ghetto during the Second World War, and her mother was a member of the Polish underground who fought in the Warsaw uprising. The director has been inspired by her background, and her political films have made her one of Poland’s most acclaimed filmmakers (she also directed an episode of The Wire. How cool is that?). Her latest film, In Darkness, is nominated for Best Foreign Language Film at this year’s Oscars, and tells the tale of a Polish sewer worker who assists a group of Jewish families who attempt to hide in the sewers beneath the Lvov Ghetto during the liquidation.

Set up in 1939 and eventual, unwilling home to over 200, 000 Jewish residents, the Lvov ghetto was liquidated in June 1943. Anyone who had managed to survive up to that point was killed or shipped in cattle trucks to extermination camps. This is where Holland’s story begins, with sewer worker Leopold Socha agreeing, for a price, to lead a group of Jewish refugees into the sewers beneath the ghetto to hide. The film follows the group for 14 months, through unspeakable suffering and moments of strength. Based on a true story, the film is incredibly moving, peopled by characters who are deeply human and depicting the incredible moral struggles that accompany war and genocide.