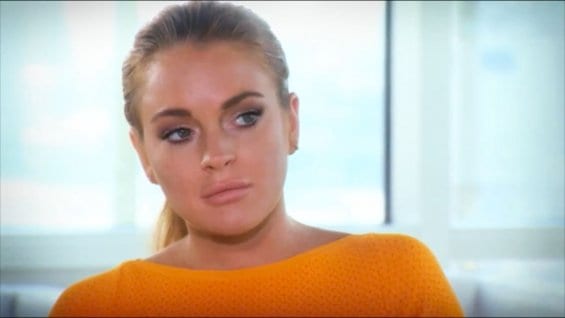 On Sunday August 18, Lindsay Lohan and Oprah Winfrey will come together for an exclusive one-on-one chat for a highly anticipated episode of Oprah’s Next Chapter. The internet is abuzz with rumors that Lindsay, after years of hard drug abuse, DUIs and numerous trips to rehab, finally appears to be clean and sober. Oprah has already promoted the episode on talk shows, claiming that she even managed to talk Lindsay out of a trip to Europe because “it’s too hard to go to Capri and not have a bellini.” And I have to admit that after watching Lindsay guest host Monday night’s episode of Chelsea Lately, she really did look like she was finally on track to letting go of her old life.

But why is it that we’re so fascinated with this upcoming interview? It’s just another Oprah interview and yet once again it’s being touted as a can’t miss moment of television history! But maybe when it comes to Oprah, it’s never just another interview. Oprah is the confessor of the celebrity world. We’ve seen it time and time again. Celebrities who have fallen from grace and denied all accusations made against them suddenly come clean when they come face to face with the big O. I like to call it the Oprah Zen Effect. No matter how uptight and uncomfortable the celebrities appear at first, as the interview progresses you can see Oprah’s subjects visibly relax and, despite being taped for a national audience, they finally feel comfortable enough to truly open up. In return, the audience gets the vindication of hearing the real story straight from the horse’s mouth. Even when the rumours have already been proven true, there is something more satisfying about actually hearing celebs, who often hang onto their denial for months or even years, finally admit to what we’ve known all along.

I suspect that’s what people are hoping to see with Lindsay Lohan. We’ve seen her attempts at making a comeback several times over the last few years, each one more disappointing than the last. Much like anyone who has dealt with an addict, we learned not to believe her when she claimed that she was really sober this time, and instead adopted an attitude of “I’ll believe it when I see it.” And even though we don’t personally know Lindsay, I think that most of us simply want to see the good in her. We want to see her turn her life around like Robert Downey Jr., Nicole Richie, and so many other celebrities who have made this journey before her. And so we’ll watch, hoping that Lindsay will confess, repent, and make mama Oprah proud.