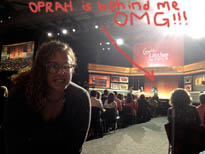 On Friday, SDTC Editor-in-Chief Jen McNeely posted a cryptic Facebook wall post that said “Hey Becca, you ready to meet Oprah on Monday?” I DIED. I check my inbox to find a lucky seat from Corus Entertainment to Oprah’s Lifeclass: The Tour on Monday at the Metro Toronto Convention Centre. WHAT?!? THIS CAN’T BE HAPPENING!

I have been (secretly) obsessed with/worshipping Oprah almost my whole life. The obsession has been on somewhat of a hiatus ever since the finale of her daytime talk show after 25 seasons in 2010. But she’s back, with a gang of experts in tow, touring the globe for her OWN Network – Yesterday, her and I were reunited!

Growing up, almost every day when I would come home from school I would watch Oprah while doing my homework. Now it makes sense why I would provide deeper-than-required life advice to my classmates as we went to the corner store at lunch. Watching Oprah all those years seriously taught me so much. We lost weight together. We read books together. People who weren’t a fan wouldn’t always understand that if something epic was happening culturally, Oprah would get that first exclusive interview. She did shows no one else was doing, was able to do or could do, and still is (for example, after Whitney Houston died, interviewing her daughter, Bobbi Christina, for OWN Network).

In a sense she was one of the first people to expose herself so personally on TV, maybe even paving the way for the birth of reality television (help us) by letting us into her own life so much. Her groundbreaking shows in the 70s up to the 2000s on homosexuality, racism, AIDS, homophobia and abuse have brought taboo topics to the mainstream in a way people my age don’t even realize. A black female who grew up in the deep South with no electricity is now, in 2012, one of the most successful women in the world. Pretty amazing.

But none of that matters right now CUZ SHE’S HERE IN THE BUILDING!!! OMG! Being in the same room with her was pretty much a dream come to life. It was also bizarre and overwhelming. You have such a personal connection with this person you share so much time with, and yet, lining up with close to 9000 other people, I was reminded that, oh yeah, so does everyone else. I was just a little tadpole in a huge ocean of other Oprah super-fans. It must be exhausting being one person that everyone wants a piece of. Everyone wants that two-hands-clasped-together handshake, and although I did not physically touch her, I was close enough to soak in her “aura” I guess you could say.

Oprah’s Lifeclass: The Tour started with 30 minute talks from her “Spiritual Mod Squad,” spiritualist Deepak Chopra, motivational speaker Tony Robbins, life coach & author Iyanla Vanzant and Bishop T.D. Jakes. Chopra touched on quantum physics, meditation, and anxiety, or “the anticipation of pain” as he called it. Iyanla, after a very, very long, regal entrance starting from the back of the Convention Centre and dancing down to the stage singing to the crowd, touched on not letting negative naysayers bring you down, and she lead a visualization exercise involving holding an imaginary orange, putting our dreams inside the orange, eating the orange and now – *poof!* – we are pregnant with our dreams. Later, Oprah joked about telling your significant other when you got home, “I’m pregnant!” Tony Robbins was quite the high-energy, charismatic 6-foot-7 dude and took the stage by storm, telling us about how “success leaves clues,” and not to keep score in relationships otherwise you will never be able to take out the garbage without getting mad after 20 years! Or something! Also if you clap your outstretched hands together and your right thumb naturally lands on top of your left, you will make a lot of money. If your left thumb naturally lands on top of your right you will have really good sex. Some audience members were caught switching thumbs—especially the dudes! Ha. All 5 of them. Bishop T.D. Jakes spoke last. He was named America’s Best Preacher by Time Magazine, and he was all that and a biscuit parable, of which he had plenty to share. He focused on family, living with purpose and values, and advised that “un-forgiveness unchecked is a cancer of the soul – it spreads.”

I haven’t spent a lot of time in Church. It got really intense and I had to go get a sandwich before the lady of the hour, the divine Miss O, took the stage at 8:00pm to film her Lifeclass. She’s real! She was there! I was there. Omg. Security guards emerged and squatted on every corner. Oprah talked to us personally about forgiveness, the topic of this Lifeclass. Forgiving others, forgiving yourself, what does forgiveness mean, and so on and so forth. Then, segments with each of the four experts helped various guests with forgiveness in person, Skyping in from around the globe and taking questions via Facebook and Twitter. At one point Oprah polled the audience with a question about forgiveness using Twitter and livestreamed the results on the monitors on stage. It was super interactive. For a brief and glorious two hours SHE WAS STANDING RIGHT IN FRONT OF ME! I WUB YOU OPRAH!!!!! Lets hang out?

For this and other episodes of Oprah’s Lifeclass: The Tour, tune into OWN Network on Mondays at 8pm or watch the Livestream of this Lifeclass here.

Inquire with your television service provider to hook up the OWN channel!

A BIG thank you to Netta and Danielle of Corus Entertainment for helping make a dream come true!