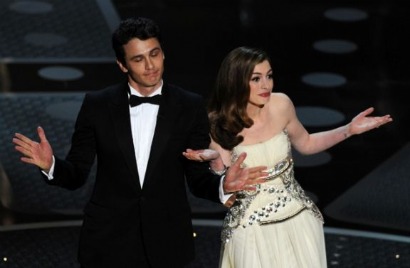 Oscars 2011: Not talking about my generation

And so it begins: the inevitable Oscar hosting backlash. As predictable as disagreements over best dressed, the bashing of the hosts and laments for Billy Crystal’s bygone days tends to overshadow the winners and losers of the big night. And though we say it every year, 2011 truly was the worst broadcast in recent memory. But this had nothing to do with comedy (or lack thereof). Rather it was the assumption that James Franco and Anne Hathaway represented my generation.

Now, to be clear, I don’t mean to slight either Franco or Hathaway as people (believe or not, I don’t actually know them) or even as actors. Putting myself in the producers’ shoes I can understand why both are the logical hosting choice for an Oscar telecast meant to appeal to the 20-30 something demographic (you know, the one that’s not going to movie theatres anymore). Their past films include “indie” choices (Howl for him, Rachel Getting Married for her) and mainstream ones (respectively Eat, Pray, Love and The Devil Wears Prada). Both are buzz-worthy, as we can’t seem to get enough of Franco’s choices (be it General Hospital or NYU) and fanboys and girls are anxiously waiting to see if Hathaway can pull-off Catwoman.

So why didn’t this youthful combination work? Leaving the bad jokes aside, it was because the roles they were scripted to play as hosts embodied the worst of what Generation Y has to offer. Franco’s stoned act was less sardonic cynicism towards the evening than it was utter apathy. The producers were clearly working on the assumption that a performance of apathy would ring true with a younger demographic. Check Twitter, the blogosphere and Facebook – we might think the Oscars are a waste of time but we are also actively engaged in critiquing just why we think it is.

As for Anne Hathaway? It was like watching Barbie on steroids: smiling and swirling costume changes accompanied by bubbly directionless commentary. The Oscars are about the dresses, of course. But when the host makes that many costume changes with no substance she begins to look like a manic mannequin, flailing from one bejeweled gown to the next, serving no other purpose other than to model. It was depressing to be asked to identify with watching someone play dress-up rather than with their talent.

Now, compare this with the acceptance speech for Live Action Short from Luke Matheny (God of Love). His hair cut joke and line about his mother doing craft services were by far the most humourous moments of the night. And it is no coincidence that they were also the most passionate. Matheny’s one minute of airtime spoke volumes of how engaged and motivated Generation Y can be, and that’s why it resonated.

Hey Academy, want Gen Y back? Start listening. We’re not all vapid apathetic lugs – and now we’ve got some proof.

Kiva Reardon is a freelance film reviewer and blogger based in Toronto.