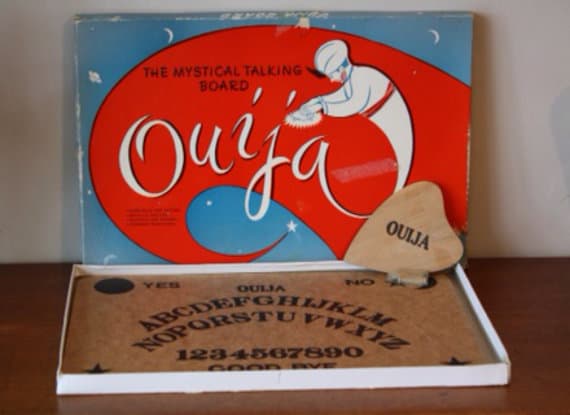 I don’t know where it came from. I vaguely recall my mom telling me it had been given to her by a friend. But, anyway, there it was: a Ouija board in our storage closet, placed on the very top shelf along with Monopoly, Clue and Twister.

Of course, Ouija wasn’t a game like the others. That was made perfectly clear to eight-year-old me. It was something to be used by adults, and not to be played with – despite the “playful” box in which it was contained. Manufactured in the 1950s, it was red and blue and featured a floating cartoon genie.

Dubbed “the mystical talking board,” I was instantly intrigued. What would it talk to me about? Did I get three wishes? If so, could I get a cat, a Disney World Trip and a date with Kevin Costner? (I was always a weirdly precocious child.)

It would be eight years later, when I was sixteen, that I would finally take Ouija out of the closet. At the time, I was obsessed with the occult. I spent many hours at the local New Age store where I would purchase healing crystals, runes, pendulums, dream catchers, tons of sage, and tarot cards.

To say that my friends and I were “interested” in fortune telling would be an understatement. Maybe it was because of our age – we were old enough to feel the itchiness of a life unexplored and still young enough to dream completely uninhibited – but anything and everything that could unlock the secrets of what our futures held (tea leaves, dream interpretation, palmistry) immediately held our attention until the next thing that promised an even better future came along. Enter: the Ouija board.

It was a sleepover party. We had just finished watching cheesy movies, the fireplace was still crackling, and none of us were tired. I was looking for the perfect opportunity to bust it out, and if I learned anything from pop culture it was that a sleepover with a bunch of teenage girls on a rainy night was the ideal setting for a Ouija introduction.

My friends were excited, yet reasonably cautious. They had doubts. Would this work? Who would we be “calling”? But we had crushes on boys and big dreams and questions we desperately wanted answered. So, we decided to go for it. We had the same thought that almost always turns out to be the famous last words in any Halloween slasher movie: What’s the worst that could happen?

Our hands were placed on the planchette. We looked at each other sceptically, warily, before we asked the board, “Is anyone here?”

Within seconds, the piece of wood slowly, but surely, moved to YES. We freaked the fuck out. “Okay, who’s pushing it?” “I’m not doing it!” “You totally pushed it!” “No one pushed it!” “If someone’s pushing it, stop it!”

Once we determined that no one was actually pushing the planchette (well, no one of this realm anyway), we returned to the board. Apparently our spirit was still hanging around, and YES, he could answer our questions for us. “Thank you,” we said.

One of us finally worked up the nerve to ask the first one. She asked if her crush did, indeed, like her back. After a few expectant seconds that felt like long minutes, the board slowly pointed to YES. Well, that was all the validation we needed; we were off to the races, asking the board our most important, pressing questions: “Will I have a date to the prom?” “Will I ever get married?” “Will I pass my math test?” (Whoever asked this definitely got a “look” for wasting a perfectly good question on fucking math.)

Things became so intense and exciting that one of the girls had to take a moment and crawled into a corner and sobbed. “It’s just so scary,” she cried (she also, not surprisingly, happened to be the most devout Catholic there). By the end of the night, we were all thrilled with our answers from the beyond. I was going to be an award-winning actress and marry Ben Affleck and pop out three kids by the age of 30 – what was not to love about Ouija?

Not surprisingly, our time with Ouija soon became addictive. At every opportunity – Halloween, rainy days, and homework sessions – my friends and I would pop out “Ouij” (we were so devoted, we even gave it a nickname) and fired away our questions. Ouij even went on a road trip with my friends and I when we brought it with us to my grandparents’ cottage and held a session in my cousin’s treehouse. You could say it was sort of like our Wilson; the inanimate object whose opinion we valued almost above our own. The shock value of the Ouija board had obviously worn off by this time; we were not so much enthralled by engaging with the “other side” as we were with what the other side of life – that is, post-high school – held for us.

About two years after our introduction to the mystical talking board, things took a turn for the worst. It’s not like anyone DIED or anything, it’s just that during one Ouija session – which would prove to be my last in high school – the board told a friend that she would end up living in a basement apartment in Ajax and married to a janitor. Needless to say, my friend was devastated. She felt not only betrayed by Ouija, but also, for the first time, scared and resentful of her future. So I placed Ouij back into the box on the top shelf of the closet and never looked back.

What we didn’t know then, and what twenty years of hindsight has shown me now, is that we were always in control of that board; more importantly, we were always in control of our futures. We will really never know whether a spirit was controlling Ouij or not (I’ve watched far too much “Unsolved Mysteries” to discredit the spirit world), but what I do know, to paraphrase from the Good Witch Glinda, is that the power to control our destiny was with us all along. During our years of consulting with the Ouija board, we had become obsessed with “knowing” life rather than living it. The reality of it was, we are, and have always been, the predictors of our own future through our intentions and actions. We just needed to grow up to realize it.

Last Halloween, my friends and I got bored of watching Halloween for the umpteenth time on AMC, so we decided to pull out the Ouija board. It told me that I’d meet my future husband at the Pickering Town Centre in ten years.