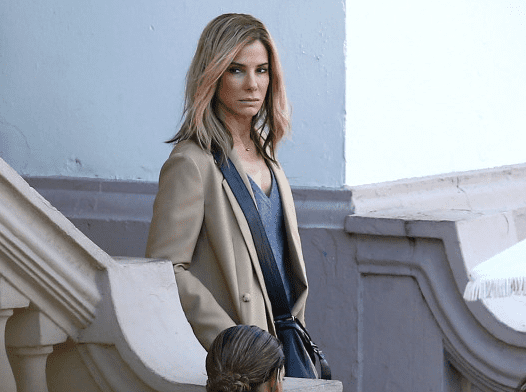 Our Brand Is Crisis premiered at TIFF last Friday. The film received buzz because it stars Sandra Bullock as political strategist Jane Bodine in a part that was originally meant for George Clooney. The fact that Bullock was awarded this role has been hailed by many, including Clooney and Bullock, as a step forward for Hollywood. This film, however, inspires the critical viewer to realize we should not merely concern ourselves with the size and number of roles female performers receive, but with the messages their characters promote.

The film starts out promisingly enough by allowing Jane to be a complicated and flawed person. In a world where women are often relegated to playing the hero’s two-dimensional love interest with good hair, that much is a welcome change. Jane is an accomplished political strategist with a history of alcoholism and depression. She is also addicted to winning. Having retired from running campaigns to focus on her mental wellbeing, Jane is lured back by the prospect of going toe-to-toe with her nemesis Pat Candy (Billy Bob Thornton), who is working for the Bolivian presidential election’s leading candidate. Jane knows the decision is a poor one for her recovery, and she also dislikes the macho, ultra conservative candidate she has to represent. Still, the allure of beating a long-time rival proves too much to resist.

When Jane arrives in Bolivia, she knows nothing about the country and does not even speak Spanish, but what she does know is how to beat other people in a presidential race. She encourages her candidate to cry on camera to look more sympathetic, hires an investigator to drag up dirt about his opponents, and crafts a campaign that manipulates voters with fear. Jane’s tactics are underhanded, but they work. At first, she’s like an evil Olivia Pope.

If Our Brand Is Crisis were simply the portrait of a highly competitive person willing to back an amoral liar who neglects the needs of Bolivia’s indigenous people, it could be an interesting movie. Male performers portray characters whose questionable motives guide them all the time. I adore the idea of an actress playing a truly unlikeable character I can root against in a film that identifies the dangers political spin doctors pose to society.

Unfortunately, Crisis takes a promising portrait of a power-hungry woman engineering disastrous election results, and turns it into something we truly do not need any more of, a white saviour story. With little explanation, Jane experiences an improbable change of heart. She feels so moved by witnessing the very misery she herself helped inflict on the Bolivian people that, before we know it, she abandons her job to become a community organizer in Latin America.

This is a film that expects its audience to believe a white American woman who is not from Bolivia and does not even speak Spanish has what it takes to play a meaningful role in uplifting the Bolivian people. It’s a film that, furthermore, endorses a white saviour role as its protagonist’s true calling. Yes, it gives a leading role to a woman in a climate where those are still too rare, but this racially and culturally tone-deaf message disqualifies this picture from constituting a meaningful victory for women.

Furthermore, the white saviour role is one of the few leading roles women have received no shortage of in Hollywood. Remember Michelle Pfeiffer as an inner-city schoolteacher in Dangerous Minds? Or Sandra Bullock herself in her Oscar-winning turn in The Blind Side? The white woman who saves people of colour is a condescending and racist trope that should have been retired years ago. That’s why this much-hyped film is so very disappointing to people who do wish female performers could receive more and better leading roles – roles that say something new and important about the world that does not patronize people of colour.

Ultimately, movies like Our Brand Is Crisis cannot truly empower female performers if they do so by suggesting under-qualified white people can somehow solve everyone else’s problems. Any intersectional feminist worth her salt knows it is not worth uplifting a white actress at the cost of perpetuating racist themes about how ignorant white folks can save people of colour.