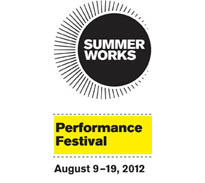 Our top picks for this year's SummerWorks Performance Festival, on from August 9th-19th

SummerWorks is a juried performance festival that brings together theatre, music and art, and in its 22nd year, it’s better than ever. Below, our top 10 picks to check out from 10 days of fantastic programming. Buy tickets here.

5. We Will WeeTube Lower Ossington Theatre Cabaret Space, August 11th and 17th after 10 pm, FREE
Coexisting in the age of YouTube and lolz, this FREE event is for all of the social media junkies out there, and anyone trying to make sense of the “the interwebs.” ~ MA

6.  Theatre: Les Demimondes Lower Ossington Theatre, Aug 12th (10pm), Aug 17th (2:30pm)
Via the multidisciplinary lens of dance, film, song, movement and monologue, Les Demimondes will be an explicit observation of how media, film, music and fine arts have profited off the allure of sex workers. There will be both comedy and nudity. ~ IL

8. Music: Evening Hymns with Fiver The Theatre Centre, August 17th @ 9:30pm
Evening Hymns, a truly heavily poignant musical act collaborates with Sean Frey, a projection artist, performer and puppeteer to create an evolving space for the release of their new album. Spectral Dusk (new record) has lead singer Jonas Bonnetta dealing with the loss of his Father, and is a record meant to be experienced more than listened to. ~ IL

9. Performance Bar: Letters and Lessons Lower Ossington Theatre, Caberet Space – August 18th @ 12am
A fresh to death urban dance lesson by Gadfly promising to make you feel like the coolest kid on the block.
Participants get to learn a combination of house, hip hop, jazz, contemporary dance and even b-boying all
at the stroke of midnight. ~ IL

10. Live Art: Wondermart Pick up headphones from the Factory Theatre Box Office  Everyday of the festival, weekdays (every half hour between 4:20-9:30), weekends (every half hour between 12pm-9:30pm)
Described by The Herald Scotland as “a delicious anti-consumerist meditation through the dream state of aisles”, Wondermart (by Silvia Mercuriali) is an interactive audio tour in a supermarket setting where the real and the imaginary blur into one. Participants rediscover the everyday setting of a “high density retail environment” immersed in a private soundscape. ~ IL