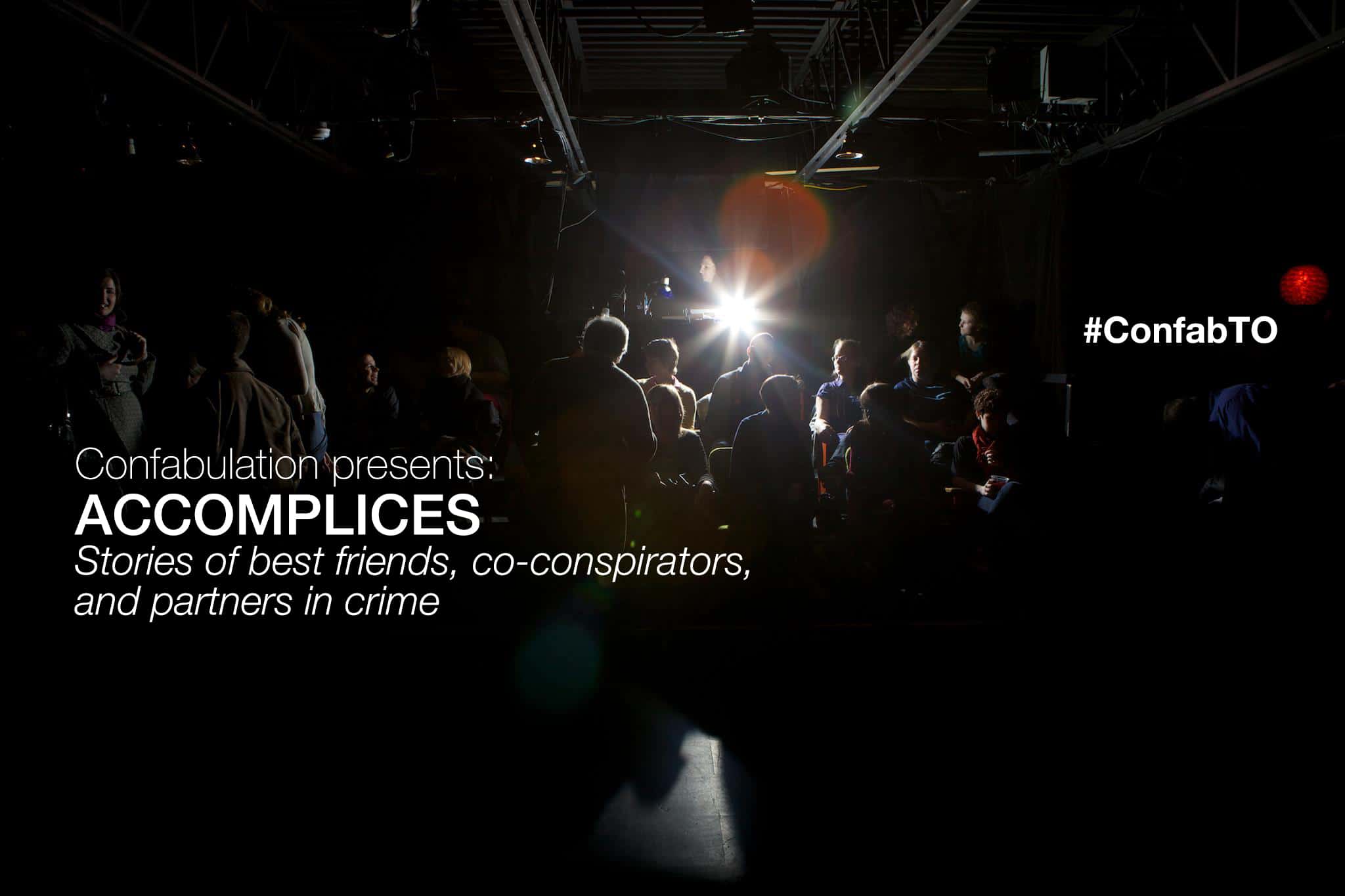 Confabulation returns to the Burdock Music Hall (1184 Bloor W.) tonight (September 7). For the uninitiated, Confabulation is an all-true storytelling series that debuted here in March 2016 after years of a devoted following in Montreal. Be prepared for quality: every story that hits the stage has been workshopped with a team of experienced storytellers.

This time, they’ll be delving into the idea of Accomplices – stories of best friends, co-conspirators, and partners in crime. Plus, there’ll be an impressive all-female lineup of talented local storytellers: Vanessa Smythe, Jillian Welsh, Marsha Shandur, Nisha Coleman and Gina Granter.

We talked to some of the team behind Confabulation to find out more about this awesome event.

SDTC: How’d you choose this set of performers?

Paul Aflalo (host and producer of Confabulation Toronto): Submissions to Confabulation are open to all, and this month’s theme enticed some fantastic pitches from many great storytellers. While we couldn’t take them all, we’re trying our best to include some of those stories at later shows. (We are always on the lookout for new storytellers, including first-time storytellers!)

This month in Toronto, we had a submission from comedian Gina Granter, who also performed at our debut Toronto show in March. One of our producers, Victoria Laberge, saw a performance by writer and actor Vanessa Smythe at the most recent edition of The Spoke (also at Burdock Music Hall, recently relocated from the now-defunct Videofag) and convinced her to submit a story for our show too. Storyteller, Marsha Shandur (who produces and hosts True Stories Told Live at The Garrison) has been on our list since we started Confabulation Toronto, and we couldn’t be more excited to have her on this month! Nisha Coleman is one of our co-producers based in Montreal, and she’s an incredibly talented storyteller; her solo show Self-Exile recently premiered at the 2016 Montreal and Toronto Fringe Festivals to great acclaim, so naturally, when she told us she was going to be in Toronto at the beginning of September, we quickly booked her. I had seen Jillian Welsh perform at Pressgang Storytelling, and also most recently at the inaugural edition of Storystar (produced by Erin Rodgers), immediately after the show I asked her if she’d be interested in sharing a story on our stage, and shortly after we had two submissions from her.

Why Accomplices? What makes this notion of partners in crime so appealing as a theme?

Matt Goldberg (founder): So many of the stories we share casually with friends are about those people who play key roles in our lives – that one friend who always got us into trouble; the other friend who could always get us out of it. We’re shaped by the people in our lives, as much as by the events. Yet so often the stories we share at storytelling shows focus on us exclusively. We’re really looking forward to a night of stories about the people with whom we have shared these adventures.

What’s behind the resurgence of interest in true-life storytelling?

MG: I think part of it is that need to feel connected to a larger community. A lot has been said about technology, changing life priorities and just the nature of our world making us feel increasingly removed from direct person-to-person contact. I think that is all part of what draws us to this artform. There is also the effect that seeing and hearing stories live reminds us of the important stories of our own lives – and the moments of connection. Storytelling helps build communities on empathy and understanding, commonalities and difference.

Check out Confabulations tonight. Doors at 7pm. Show at 7:30pm. Tickets are $10 and available at the door.