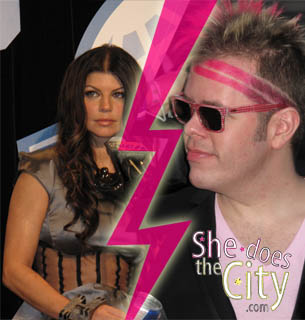 Who would have thought it could get crazier than the Jonas Brothers? After last night’s Much Music Video Awards, an altercation of supreme ridiculousness erupted between The Black Eyed Peas and Queen of All Media, Perez Hilton. While we were throwing ‘bows in the Ultra VIP section, Fergie was throwing accusations-and Will.I.Am was throwing his weight around. The Glamourous One asked Perez why he’d been shit-slinging on his site about the Pea’s latest single, and when Perez wouldn’t apologize, a distraught Fergie turned to her band-mates.

This is where things get fuzzy-in contradicting video statements, Will.I.Am and Perez describe the scene that unfolded when the two left the afterparty for the other afterparty, at Cobra. Will.I.Am alleges that he respectfully requested that Perez keep his million-hit mouth shut, and Perez responded by calling him a "faggot." This so enraged a loyal B.E.P. fan that he leapt (literally) to Will’s defense, punching Perez in the eye.

But Perez’s version of the skirmish goes a little something like this: after some aggro accusations from the B.E.P. frontman (or "heat seeking missile," as Perez describes him) and the name-slinging outside the club, Will.I.Am’s manager, Polo, punched Perez repeatedly. And a person should never be hit. Because "that’s why people die." According to Perez, no behaviour, ludicrous or not, constitutes a physical attack.

A distraught Perez returned to his hotel, and when the Toronto police wouldn’t give him the response he required, he did what any logical human being would do-and turned to Twitter, calling the masses to his defense. Police eventually showed to indulge him, but according to Perez, this isn’t over: he now officially has a vendetta against the Peas and Fergie, the "fugly bitch."