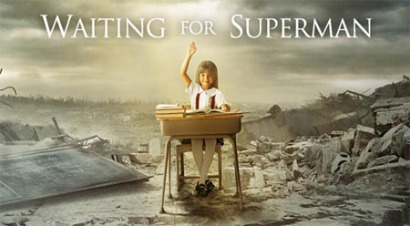 Bad Teacher trailer – Exes Justin Timberlake and Cameron Diaz as well as Phyllis from The Office and the sweetly funny Jason Segel star in this upcoming comedy. The trailer is now out and ispretty hilarious.
Waiting for Superman on DVD – The state of the US education system is no laughing matter. This documentary explores and explains the differences between public education and the possibility of getting your child into a high-performing Charter School. The film follows several students leading up to the lottery that will decide if their future is bright or if they’ll possibly be just another drop-out statistic. It is heart wrenching, informative and wonderfully done. A must see. Waiting for Superman is now out on DVD.
Bieber takes it from Miley on SNL – The Strokes were present (and amazing) for one of the funnier SNL installments of late. This weekend’s guest host was Miley Cyrus who cast member Vanessa Bayer has been parodying on the recurring Miley Cyrus Show sketch. Brilliantly, the sketch was featured again on Saturday with Bayer playing Cyrus and Miley taking a jab at Justin Bieber. It’s pretty cool y’all.
Walking dead – The gory, addictive, graphic novel phenom had an incredibly successful six episode run last year on AMC. Despite disliking horror films, guts and gore; I found myself totally engrossed and addicted to the Zombie antics. The drama is palpable, the sex is sexy and the frights are terrific. The complete first season DVD is out this week; catch all the living dead action before season two hits. Shudder….
New Elbow album (say that ten times fast) – Brit rockers Elbow are back with their fifth studio album; Build a Rocket Boys! The critical darlings will no doubt engender more praise for songs like Neat Little Rows, their lead single. The album is out digitally on March 8th and will hit stores April 12th.