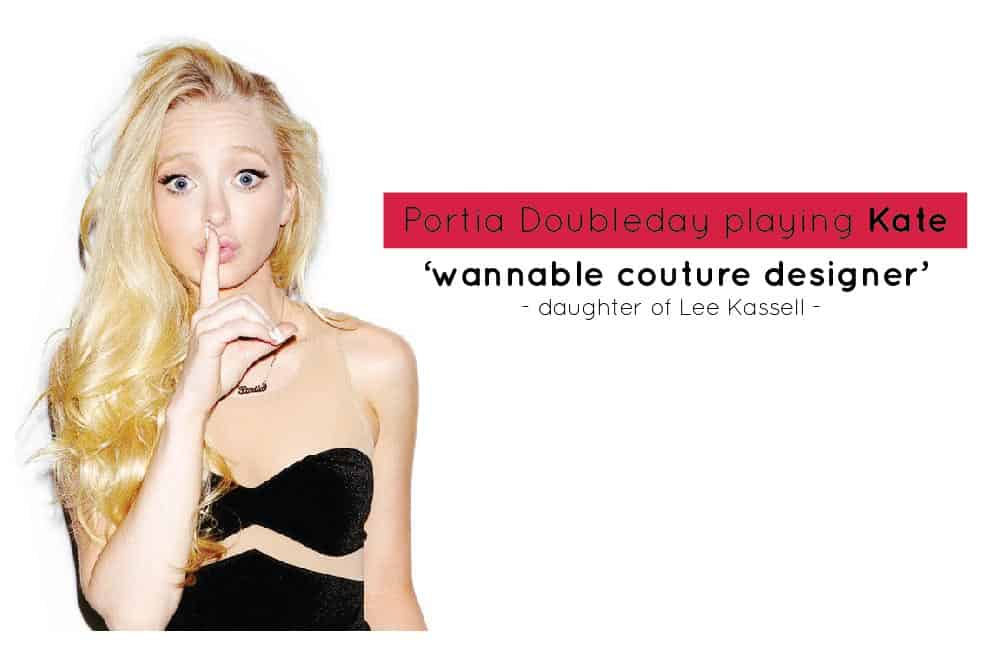 Girl Crush: Portia Doubleday of After The Ball

Directed by Sean Garrity (My Awkward Sexual Adventure), After The Ball is a Cinderella-like fairytale set in the cutthroat world of fashion retail. The film tells the story of recent fashion grad Kate Kassel (Portia Doubleday), who hopes to bring new life to her family’s faltering fashion empire. Although her father (Chris Noth) is the CEO, their relationship is shaky at best and proving her worth at the corporate head office becomes impossible when her conniving step-mom (Lauren Holly) and two dim-witted/totally hilarious step-sisters (Natalie Krill, Anna Hopkins) are determined to see Kate fail. In order to save the family business, Kate returns in disguise as Nate. Naturally, this makes the budding office romance Kate has found herself in a bit tricky.

Before seeing the film, we had our doubts. It sounded like a silly Disney wannabe, but we were pleasantly surprised; the writing is clever, cute and very funny. With a mix of big name stars and promising, fresh young talent, After The Ball delivers both a sweet romance and hilarious comedy that can be enjoyed by you and your twelve-year-old niece. (Take her!) Of course, the nonstop fashion (designed by Le Château) also makes for fun eye candy.

It was easy to fall for Kate; the character is kind, endearing and reminded us of our younger selves–desperate to gain respect at our first big job, but continually relegated to the photocopy room, or in this case, the button closet. We caught up with Portia Doubleday on the day of the premiere in Montreal, where the film was shot last spring.

What was it about this role that hooked you?

I loved that it wasn’t your traditional Cinderella story. Usually Cinderella stories have so much to do with the prince saving Cinderella, but this was a very strong female character that saves herself. The perk is that she gets the guy in the end, but that’s not her objective. It’s more about discovering her identity.

What was it like to play Nate? How did you find your inner dude?

It was very, uh, funny. We tried a bunch of things. At first we tried teeth–they were ginormous and made me look like some weird creature. Then we tried the nose–I had never had so much glue in my nostrils before, it was endless boogers of glue. I also had to wear a bodysuit, which totally changed my posture. I’m really glad I didn’t grow up in the flapper era! That bodysuit was so tight. Nate represented what Kate wanted: confidence. He was a weird and nerdy, but sophisticated and colourful character. It was really fun finding the dichotomy of both of them.

It was wonderful! Chris has HUGE presence. He’s a big guy with a full baritone voice, but he’s really goofy. He does a wild Robert DeNiro impression. Working with him was really fun.

Did you enjoy shooting in Montreal? Was it your first time in Canada?

Working out here was such a pleasant experience, way more laid back and creative. People here are incredibly nice and beautiful, on the inside and out. I loved walking around, but I didn’t get much time. The Old Town, is that what they call it?

It was beautiful. I brought my dog with me, we had adventures.

What did you learn most from this experience?

I learned to appreciate fashion. Jane Segal, who runs Le Château, is a corporate woman who has maintained a beautiful soul; she inspired me so much, Kate so much! I shadowed her a few times at Le Château and saw what it’s like to work in the clothing industry, in couture, and I loved seeing how much passion she has.

What is the greatest fashion lesson you learned through working closely with Jane Segal and Le Château?

There is a scene where I talk about a shoe, and use all these vocabulary words to describe the shoe. I had never known these words previously! I sat in a room with 500 shoes, it was a dream, and I watched just how much detail goes into everything they make. They’d change a heel size by half an inch and ask, “What kind of woman wears this shoe?” Every piece of clothing had an identity; I had never thought of it like that.

What tips do you have for breaking not just into the fashion industry, but into any industry?

Make sure you are fighting for something you love and are passionate about. Integrity, dignity, respect: don’t lose touch with your soul in order to gain respect from others. Put in the grunt work.

After the Ball is now playing. Watch the trailer here.