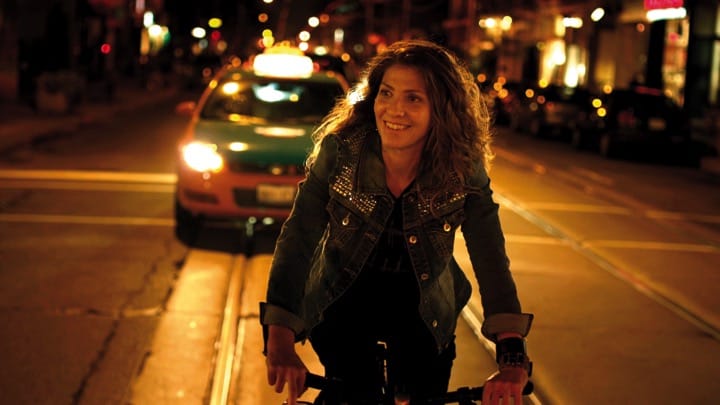 Portrait of a Serial Monogamist: Interview with Christina Zeidler

The queer scene in Toronto’s West Queen West and Parkdale neighbourhoods has developed significantly over the past two decades. It’s a colourful and gritty community that welcomes all stripes of sexuality; Christina Zeidler’s Portrait Of A Serial Monogamist captures the energy of the unique strip with delicious accuracy. I met with Christina at The Gladstone Hotel (which she’s owned since 2003) to talk about her film, queer urban spaces, sex, and some of the legendary party nights that sparked a movement or shift. Succulent, juicy, dense and complex: this flick triggered more questions, memories and excitement than just about any romcom could. Wet your lips and hunker down: there’s a lot going on here.

“It’s always the guy who is the loveable fuck-up. Everyone forgives him because he’s charming, but that guy is a jerk and he’s working in a record store. And I was like, “Why can’t we have a female character like that?” It was a lively conversation between Christina and Michael, sparked by a recent viewing of High Fidelity that inspired the initial idea behind Portrait of a Serial Monogamist. “We flipped the genre and made her a woman. We thought that was a good place to start,” says Christina.

So begins the story of Elsie: an alluring, brainy, forty-something lesbian who breaks up with her long-term girlfriend in a shitty way, and then pedals around Parkdale looking for the next woman to fuck (told you: juicy).

Portrait of a Serial Monogamist presents a captivating narrative that explores the tender questions of middle age: Where am I in life? How come I’m not settled? Is this it? But rather than being in a shrink’s office, Elsie works out her deep-rooted anxiety through the packed dance floors and back alleys of Toronto. “She’s a character that moves forward without knowing what she’s doing, and Toronto is a city that moves forward without really knowing where it’s going,” Christina says. For those of us who live here, the film is like a running game of Where’s Waldo? (HA! I know that chick in the scene at The Beaver! I made out with her once!) The familiar places and spaces conjure up our own memories. For those of us who have lived here long enough, we can remember a time before the neighbourhood became the vibrant, welcoming place that it is today.

“Living in the west end downtown core in the 90s was a lot of wide empty spaces, a lot of different trade, a lot of walking down dark alleys at night. If you were an artist living down here, there weren’t people around, so you owned it.” Although the neighbourhood was inhabited by many in the LGBT community, it didn’t feel the same. “I used to live on Gore Vale. We’d leave the bar and I’d walk home with my girlfriend. We’d make out on the street, and the cops would circle the bar and harass us on the way home. We now live in a much safer city and that’s the standard; that’s how it should be. That’s what we fight for everywhere else.”

So, how did the change happen? I’m not exactly sure, but I do remember feeling the shift when art shows and party nights were suddenly identified as queer. When lesbian and gay nights started popping up in other Toronto neighbourhoods, aside from Church and Wellesley. Lee’s Palace had Will Munro’s legendary Vazaleen, which later moved to The Stone’s Place in Parkdale, and The Gladstone launched Hump Day Bump in 2003, the same year Christina took it over. “It was about mixing together the art scene and the queer scene. There’s a long tradition of it in Toronto, but I think with Hump Day Bump we were trying to create a real space that was regular every Wednesday.” It was a night that welcomed all, including “straight” girls like me, who identify under the queer umbrella.

Portrait of a Serial Monogamist is a film that represents a very strong community in Toronto that continues to strengthen and deepen year after year. It makes me very proud to call this city home.

Portrait of a Serial Monogamist is now playing at The Carleton Cinema. Watch the trailer below.