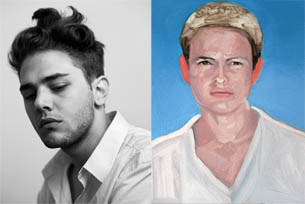 Boy, do I ever love vernissages; finger food, free bevys, pretty people, and a healthy sprinkling of art-house weirdoes usually adds up to a good time. Oh, and there’s usually some pretty decent art, too.

This Thursday, January 21, the Plateau is graced by not one but two vernissages by three Montreal-based artists. May the best cheese platter win.

Portraits 2 by Richmond Lam @ Ctrllab
The exhibit, the second installment in Lam’s portraiture series, features 15 black and white snaps of Montreal artists and musicians with a couple shots of Kids in the Hall tossed in for good measure.

Richmond Lam is a freelance photographer whose work has been featured in Vice, Maclean’s and Nightlife, and whose subjects include Bloc Party, Sam Roberts and Melissa Auf der Maur.  This body of work consists of subjects whom he had encountered through commercial assignments and personal friendships.

The vernissage will include a silent auction, an acoustic set by Dirty Wedding, and DJ set by Mitz.

Then, when the boxed wine starts to run low, head North on St-Laurent to