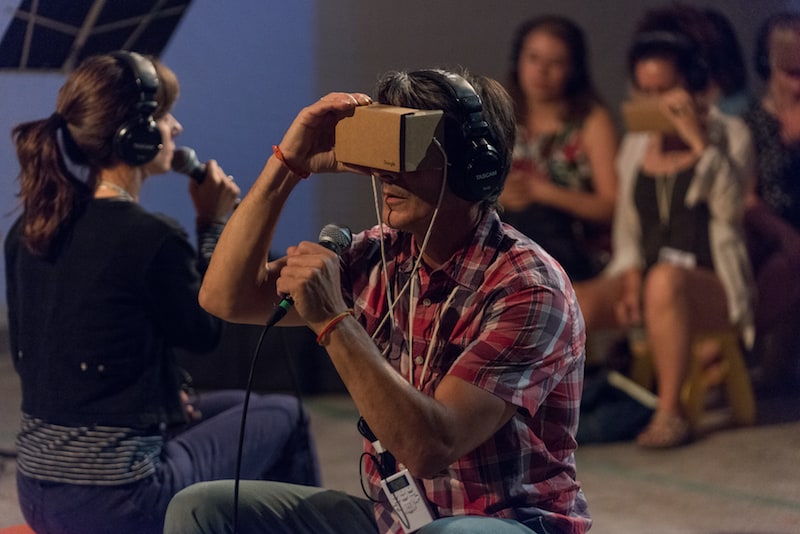 Now in its fifth year, Progress Festival—produced in partnership between The Theatre Centre and Summerworks—has established itself as one of Toronto’s most cutting-edge experimental arts’ events. This year’s programming is a testament to the provocative direction that contemporary theatre is moving in, both locally and internationally, in order to attract new audiences through innovative storytelling.

In Café Sarajevo (this weekend only-don’t miss!), audiences will explore a divided nation within the framework of a live podcast.

The production follows co-creator Lucy Simic as she travels to her father’s birthplace of Bosnia, examining themes of nationalism, racial bias and war tourism. Told through an impressive combination of dance, games, music, and 360 video, Café Sarajevo is thrilling immersive art that encourages audiences to absorb ideas from all directions. 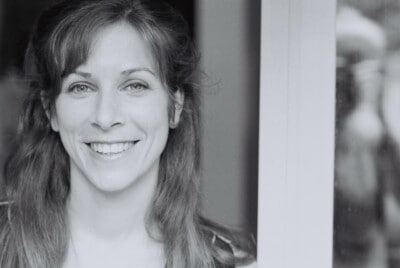 We caught up with Simic, to find out how such a rich multidisciplinary show grew out of a curiosity to understand her roots.

When were you last in Bosnia? How has your outlook of the place changed over the years?

The trip that inspired the piece happened during the summer of 2016; my first trip to Sarajevo. I think that first trip inspired the biggest shift in my outlook on Bosnia. It showed me what a naive understanding I had of the history there. The other thing I noticed was how much slower Bosnia is recovering from the war in the nineties in comparison to Croatia.

What themes/ideas were at top of mind for you while writing Café Sarajevo?

I was concerned with the rise of nationalism globally and more specifically, Islamophobia and Trump’s “Muslim ban” around the time of the Syrian crisis. All these crises were rising as we were developing the piece and then we drove into Bosnia, which still has visible scars from the war. Learning more about the ethnic cleansing and genocide that happened there in the nineties as a result of nationalism was devastating.

I was also intrigued by notions of language; language that divides us, trigger language, language that can fuel aggression. And seeing a younger generation in Sarajevo able to work past the seemingly insurmountable loss of trust, made me think about the idea of forgiveness.

What exactly is war tourism and how does it manifest itself in Bosnia today?

War tourism refers to travel to war zones for recreation or historical study.

As part of our research, we took several tours that took us to where the front line was and described what had happened there.  One was called Times of Misfortune and took us to the Tunel spasa or “Tunnel of rescue,” which was a tunnel that ran underneath the airport linking two Bosnian territories that had been cut off. It was the only way supplies could get in and people could get out during the 1,425-day siege.

Clearly, in the aftermath of war, as in any trauma, there is a need to talk about it, to process it, to identify victims and perpetrators, and to show the resilience of the defenders. You can’t go to Sarajevo (or Mostar) without noticing there was a war there. Some buildings have not been rebuilt since they were bombed. I’m not sure where one crosses the line from respectfully acknowledging a country’s difficult history to satisfying some morbid curiosity. Jasmin, our guide on the Front line tour, who we quote in our performance, said, “I don’t give these tours to encourage some fantasy people have of war. No one wins in war. I give these tours so people see what happened here, what can happen anywhere, and work for peace in the world.”

What is your most profound memory from your father’s homeland?

When I went with my father to his birthplace Skočaj, a tiny village on the outskirts of Bihać in northwestern Bosnia. It was the summer of 2008 and we were on the Adriatic coast celebrating my parent’s fortieth wedding anniversary. My father, mother, husband and I drove three hours from Poreć to Skočaj and spent a day visiting the house where he was born, my grandfather’s grave, the family field, and meeting with some of his childhood friends. This was the first time I had been to Skočaj with my father. He left Yugoslavia in 1954 and didn’t return for forty years. He wasn’t able to go back, partly because of his activism against human rights abuses in Yugoslavia and partly because of his efforts towards independence for Croatia. He was absent from all the trips I took as a child to visit relatives there. It was extraordinary to go back with him and hear the stories the trip brought up.

Why was it so important for you to return to this area and grapple with these issues now?

Bosnia was calling me when the Syrian crisis happened. Seeing all those images of people moving West, leaving their homes, taking such tremendous risks and then being denied entry in so many countries brought up memories I had of watching the news in the early nineties about the atrocities that were happening in Bosnia; there was a genocide of Muslim people there in the nineties. It was the first time I heard the term ethnic cleansing. I’m Canadian but live in the US now and I am afraid of where the rising fear and intolerance of asylum seekers will lead us here and globally. I think I needed to go to Bosnia to feel as though I were somehow part of it, as a witness, as a gesture of solidarity.

A sense of the beauty and sorrow that Sarajevo holds. A reminder that now, more than ever is the time to come together.

Café Sarajevo is now running at the Theatre Centre, as part of this year’s Progress Festival. Reserve your tickets now.