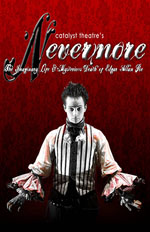 The life of Edgar Allan Poe in a lot of ways seems ripe for wallowing in tragedy and hitting a bottle of gin (or laudanum, as the case may have been in the 19th century—GOD I miss those days!)  But this year at Luminato, Jonathan Christenson has something a little more light-hearted in store.  On tonight and for the next couple of days, Christenson and the folks of Catalyst Theatre are putting on a show about the life of that most infamously ill-fated writer with their tongues firmly planted in their cheeks.

Shedoesthecity: What excites you about Nevermore?

Jonathan Christenson: I think it’s been fun for us to tackle a guy [Edgar Allan Poe] who has a reputation for being dark and macabre with a sense of playfulness.  We’re walking the tightrope of his life (which was one catastrophic event after another) with a sense of humour.  People know him as someone very dark and they forget he had a tremendous sense of humour; that’s been a lot of fun for us, trying to have a fresh look at Poe…he was a bit of a rebel in his own day, so we cast a younger actor.

SDTC: What can audience members expect?

JC: Music is a huge part of the show so its’ underscored from beginning to the end, I hesitate to call it a musical, but it flows back and forth between spoken and sung.  It’s not really for musical fans, though, because it’s not really a musical.  It does get compared a lot to Tim Burton’s work, it’s got a fairy tale feel, but more intended for adults.

SDTC: What was your mantra for directing Nevermore?

JC: I do a lot of research before I start working on a piece, but then I set it aside. Instead of adhering to a single, narrow vision, I think everyone involved should engage with their imaginations, everyone should feel like they can bring all of their creativity to bear on the piece; it leads to a lot more imaginative piece. Two minds are better than one, and twelve minds are that much better. I like to work with a spirit of saying yes!

SDTC: Nevermore deals a lot with blurring the line between fact and fiction; What facts and fictions were used in its creation and direction?

JC: [When you see the play] you can’t help but think about what you know about [Poe], a sense of the tortured genius, he suffered a lot of loss, had a mysterious death; you can’t help thinking about the man and what he went through. But we thought it would be fun to tell the story of his life in the same way that he wrote: always blurring the lines of fact and fiction.  So we told the major events of his life, and tied in various motifs of his (ie, we took his stepfather who was a malevolent figure, and bled that character with the old man in “Tell-Tale Heart”. The relationship is parallel between the man in “Tell-Tale Heart” and the step father)

SDTC: Anything else to add?

JC: I do think it’s a tough piece to describe, but I really think that if people take a plunge and try it out, they won’t be disappointed.

Nevermore premiers tonight at 7:30pm and is on until June 13 at Winter Garden Theatre