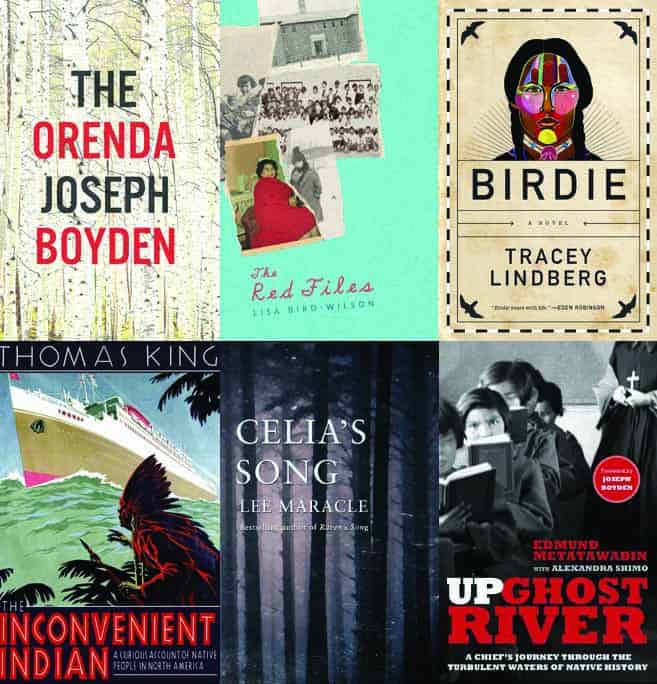 Today marks the 20th anniversary of National Aboriginal Day. It’s a day to celebrate strong and vibrant culture from indigenous groups all over Canada. It’s a day to reflect, and a day to learn, and the best way to do that is to listen, read, and watch stories of the people, by the people.

Birdie is a darkly comic and moving novel about the universal experience of recovering from wounds of the past, informed by the lore and knowledge of Cree traditions.

Rich with dark and light, pain and magic, The Inconvenient Indian distills the insights gleaned from Thomas King’s critical and personal meditation on what it means to be “Indian” in North America. It weaves the curiously circular tale of the relationship between non-Natives and Natives in the centuries since the two first encountered each other.

A visceral portrait of life at a crossroads, The Orenda opens with a brutal massacre and the kidnapping of the young Iroquois Snow Falls, a spirited girl with a special gift. Her captor, Bird, is an elder and one of the Huron Nation’s great warriors and statesmen. It has been years since the murder of his family, yet they are never far from his mind. In Snow Falls, Bird recognizes the ghost of his lost daughter and sees the girl possesses powerful magic that will be useful to him on the troubled road ahead. Bird’s people have battled the Iroquois for as long as he can remember, but both tribes now face a new, more dangerous threat from afar.

A powerful, raw, yet eloquent memoir from a residential school survivor and former First Nations Chief, Up Ghost River is a necessary step toward our collective healing.

Celia’s Song relates one Nuu’Chahlnuth family’s harrowing experiences over several generations, after the brutality, interference, and neglect resulting from contact with Europeans.

This debut poetry collection from Lisa Bird-Wilson reflects on the legacy of the residential school system: the fragmentation of families and histories, with blows that resonate through the generations.

After the Last River, Victoria Lean

Filmed over five years, After the Last River is a point of view (POV) documentary that follows the Attawapiskat’s journey from obscurity to the international spotlight during the protests of Idle No More. Filmmaker Victoria Lean connects personal stories from the First Nations to mining industry agendas and government policies, painting a complex portrait of a territory that is an imperiled homeland to some and a profitable new frontier for others. After the Last River airs on CBC July 1st at 8pm.

The People of the Kattawapiskak River, Alanis Obomsawin

The People of the Kattawapiskak River exposes the housing crisis faced by 1,700 Cree in Northern Ontario, a situation that led Attawapiskat’s band chief, Theresa Spence, to ask the Canadian Red Cross for help. With the Idle No More movement making frontpage headlines, this documentary provides background and context for one aspect of the growing crisis. Watch on NFB site now.

Empire of Dirt made waves when it premiered at TIFF in 2013. Moving, provocative and with powerful performances, this film tells the story of three generations of First Nations women’s struggle to deal with the demons of their past.

Mixing traditional pow wow vocals and drumming with cutting-edge electronic music, A Tribe Called Red is signed by Arts and Crafts, and is quickly gaining worldwide attention. Turn it up and DANCE. We also love the beautiful videos that are both poignant, electrifying, and gorgeous to watch.

N’we Jinan is a music initiative that gives a voice to First Nation artists through music and creative expression. The music and videos developed through this program are coming out of remote communities from passionate and talented youth.