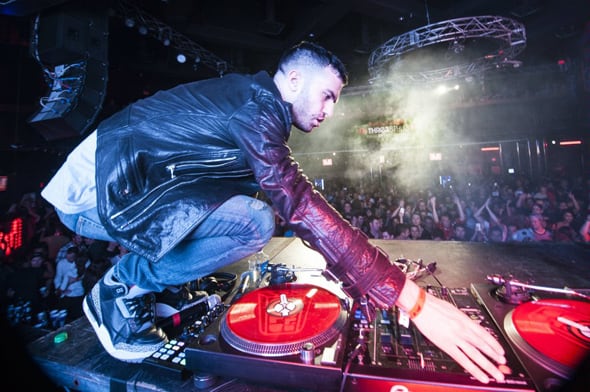 Red Bull Thre3style will find Canada’s best DJ Red Bull Thre3style is the only DJ competition of its kind, pooling talent from across the globe to battle it out for worldwide sonic supremacy. It started as an underground experiment in 2007, and was met with enormous interest. The fest has since grown like a bad weed, and has become a total game changer in the face of modern DJ battles. This month, two massive regional qualifying rounds pulled in the slickest talent from Canada’s East and West side. The top tier will go on to compete for the crown at the Canadian Nationals on July 26th.

On July 11th, Toronto’s competition night at The Hoxton awarded DJ D-Smooth, DJ Tom Fleming, and PLAEBOI as the East qualifiers, and on July 20th DJ C-SIK, Charly Hustle, and DJ Heebz proved themselves to be the best in the West. This in-your-bass collection of treble-makers will head to Vancouver face off against each other, as well as last years National champ Adam Doubleyou.

These DJs do their homework in preparing 15-minute blazing sets of all original material. They take it to the stage where frenzied club-kids groove to their heart’s content, and the star panel of judges assess for the best.

Who’s gonna take it home for Canada? It’s up to international DJ heavyweights Skratch Bastid, Grandtheft, Thugli, Hedspin, Smalltown DJs, Four Color Zack and DJ Jazzy Jeff to decide. and seriously, even if these competitors don’t take the top spot, they still get to witness headlining performances by DJ Jazzy Jeff, Smalltown DJs, Four Color Zack and Hedspin! The 2014 National Champion will go on to represent Canada at the World Thre3style championships in Azerbaijan in August.

Here are some links to stay up to date: Facebook, Twitter, and the official Thre3style website. I recommend taking some time with your headphones on Red Bull The3style’s Mixcloud, as they upload the entire DJ set of each competitor. It’s a cool way to discover some all original DJ masterpieces, and most likely find some new favourite jams.